Last week, the highly influential World Economic Forum (WEF) met in Davos to discuss its latest recommendations for the world. But since its past recommendations helped cause a global energy crisis, the WEF should have taken the occasion of Davos to apologize and examine what caused it to be so wrong.

Europe and the rest of the world are currently experiencing a global energy crisis, caused by one fundamental factor: underinvestment in fossil fuels on the false assumption that unreliable solar and wind could rapidly replace them.

For more than a decade, Davos has been pushing government restrictions and ESG restrictions on fossil fuel investment, production, and transport. The World Economic Forum has used its power and prestige to push the claim that solar and wind are cheaper than fossil fuels and therefore can rapidly replace them. The much-publicized WEF Handbook on Renewable Energy Investment claimed in 2016: “In an increasingly larger number of countries, it has become more economical to install solar and wind capacity than coal capacity.”

The claim that solar and wind are cheaper than fossil fuels is a dangerous falsehood that ignores the enormous costs of giving 24/7 life support to these unreliable forms of electricity, as well as the vast superiority of fossil fuels for many non-electricity uses such as heavy-duty transportation and industrial process heat.

The World Economic Forum has been a leader in discouraging investors from investing in the fossil fuel projects that it’s clear the world desperately needs. In 2020 WEF founder Klaus Schwab said so explicitly:

…we should ensure that all policymaking and business decisions, go through and pass an intergenerational-impact test. … it would mean investors divest their fossil-fuel portfolio and build up a green-energy one — another initiative that’s underway under auspices of the World Economic Forum.

In reality, while fossil fuels may have affected the climate, there is no “climate emergency.” The death rate from climate-related disasters has declined by a factor of 50 over the last 100 years, in large part due to fossil-fueled infrastructure such as heating, air-conditioning, irrigation, evacuation systems, etc.

But the WEF’s anti-fossil fuel prescriptions have caused an energy emergency, including fertilizer shortages and increasing fears of starvation.

The WEF’s anti-fossil fuel prescriptions have been particularly cruel for the world’s poorest people, including the 3 billion individuals who use less electricity than a typical American refrigerator. Those individuals’ best chance to rise out of poverty is fossil fuels — which is why China and India are doubling down on fossil fuels — and yet the WEF has pressured the poorest places in the world to forego fossil fuels.

When an influential organization contributes to a global crisis, the only appropriate course of action is to apologize, then reflect on the root causes of its deadly errors. But instead of apologizing and reflecting, the World Economic Forum held a Davos program that continued to demonize fossil fuels and lionize solar and wind — to the point of proposing, as a meaningful form of energy, solar panels that work at night! 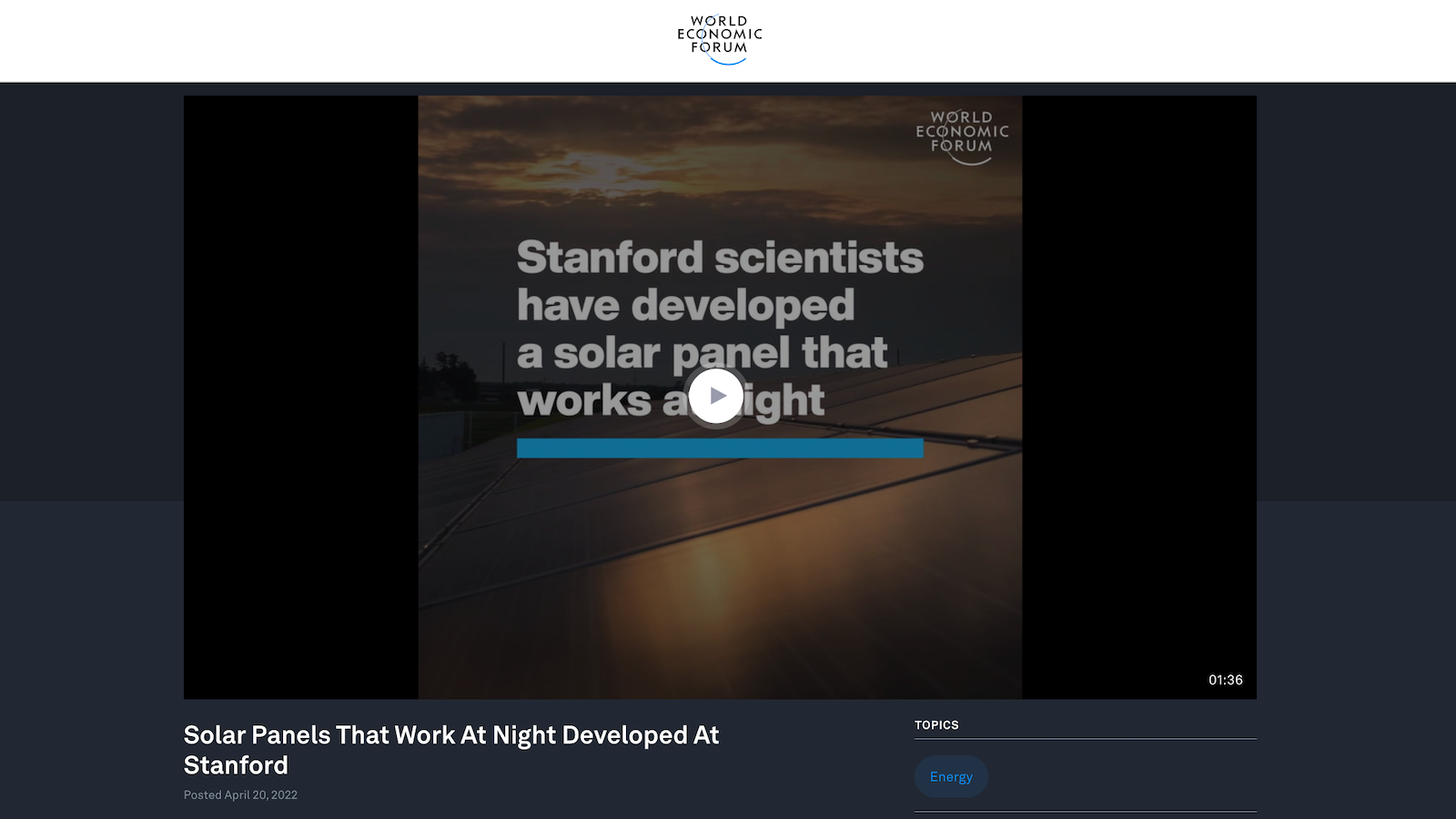 Last week at Davos, leaders showed no contrition and instead doubled down on their anti-fossil-fuel ways. One speaker, Alibaba Group president J. Michael Evans, talked excitedly about an “individual carbon footprint tracker. Stay tuned. We don’t have it operational yet, but this is something that we’re working on.”

The WEF’s major role in causing today’s global energy crisis, and its total failure to apologize for and reflect on that role is further confirmation that the WEF is an anti-freedom and ultimately anti-human organization that seeks totalitarian control in the form of a Great Reset and does not care the result for human life around the world is a Great Regress.

The world needs a different kind of “great reset” on energy — a reset of how we think about these issues. Specifically, we need to look carefully at not just the negative side-effects of fossil fuels but also their enormous benefits, both for the minority of people in the world who enjoy the benefits of low-cost, reliable energy, and the majority of the world that doesn’t.

Alex Epstein is the founder of the Center for Industrial Progress and author of the book "Fossil Future".