Democrats for Life released a full-page ad in The New York Times calling on Joe Biden and the Democratic Party to abandon its left-ward lurch on abortion.

Democrats for Life released a full-page ad in The New York Times Sunday calling on former Vice President Joe Biden and the rest of the Democratic Party to abandon its left-ward lurch on abortion. The nonprofit organization says the party’s platform is out of touch with the majority of Americans and even a third of the party.

The ad, which includes a list of 109 current and former elected Democrats from the federal, state, and local levels, demands their presidential nominee back away from the party’s support for late-term abortion while supporting proposals to codify the 1973 Supreme Court ruling in Roe v. Wade into law.

“In 389 out of 435 Congressional districts, a majority of voters support a ban on abortion after 20 weeks,” the group wrote. “When Democratic leaders support late-term abortion, they push many voters into the arms of the Republican Party. Many people supporting pro-life views are single-issue voters.” 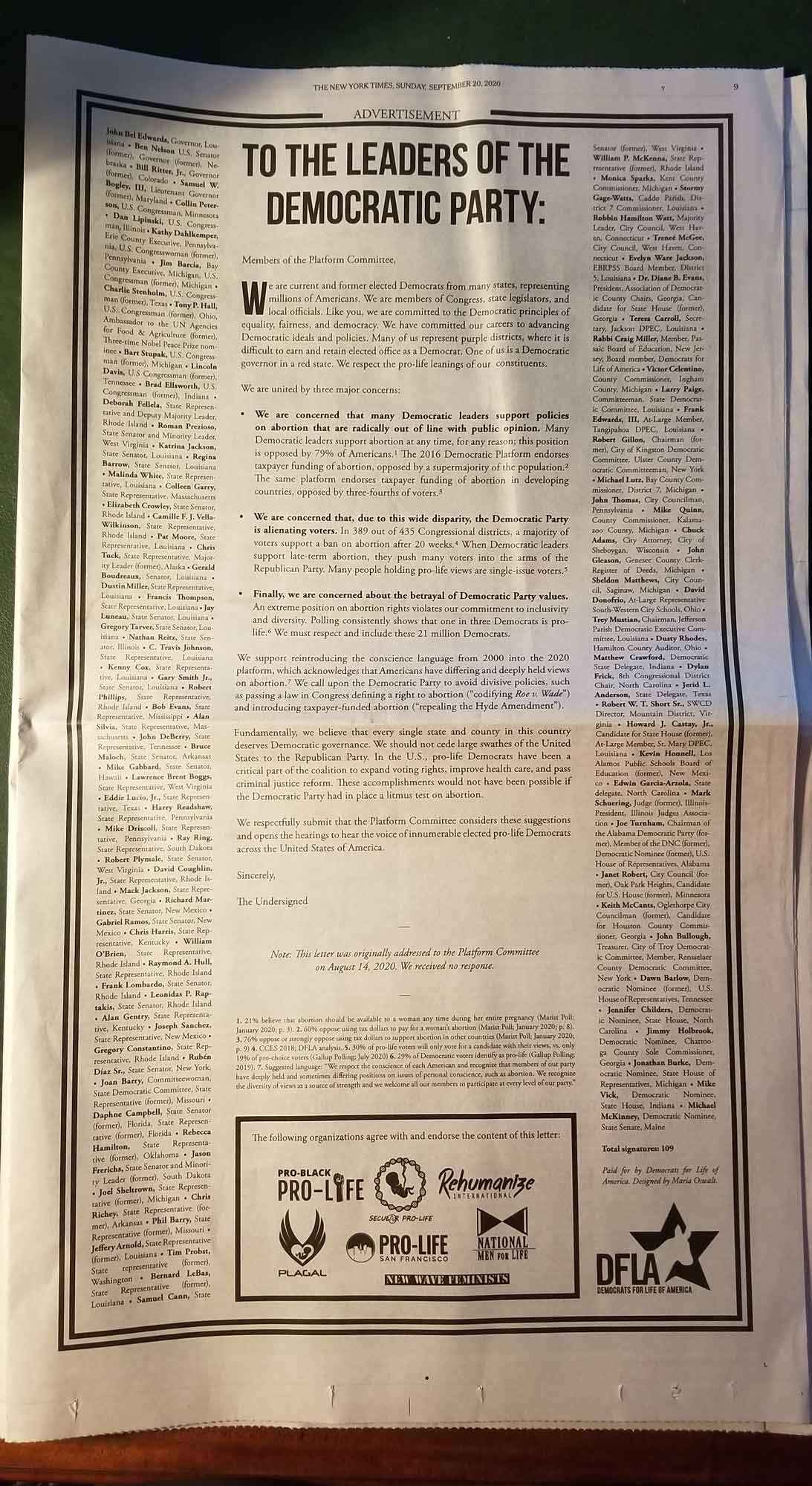 “Our party has traditionally been very tolerant and welcoming of diverse views, yet it has pushed away Americans who are with us on many issues, but share a strong conviction on abortion. If the Democratic Party cares about defeating President Trump in November, it should reject abortion extremism and actively embrace America’s 21 million pro-life Democrats, or else many of them will simply stay home,” Day said. “It’s not too late for Joe Biden and our Party.”

After a 20-candidate primary sidelining any who might be considered “moderate,” Biden emerged as one of the most pro-abortion presidential candidates in modern history. His platform endorses codifying Roe v. Wade into law, restoring federal funding for major abortion provider Planned Parenthood, and the repeal of the Hyde Amendment, which he once supported, that prohibits federal dollars from funding the barbaric practice.

The Biden platform indeed remains at odds with the American public on the issue, particularly with women and 30 percent of Democrats, according to a 2019 survey from the Pew Research Center.

According to a 2016 Knights of Columbus/Marist poll, 77 percent of women support restricting abortion to the first trimester at most, or when an unborn baby is 12 weeks and younger. By 12 weeks old, a baby has a heartbeat, a spinal cord, all his vital organs, genitals, and hair. He also kicks and sucks on his fingers and toes. Fifty-nine percent in the Marist poll said they believed abortion is morally wrong.