Five weeks after he was killed in a hit and run, and one week after D.C. politicians promised to help, the family of Master Sgt. Joseph W. Velasquez are still not able to lay the man — a brother, a father, a grandfather, a husband and a son — to rest in Santa Fe National Cemetery. Despite Joseph’s 20 years of service to the United States Army, and despite his brother Phillip’s 20 years, and despite his father’s 20 years — despite 11 tours of combat between the three of them — both Washington and Santa Fe politicians have remained on the sidelines.

At issue is a directive the cemetery’s director, Cindy M. Van Bibber, has enforced for funerals: Only six family members will be permitted to attend the burial, which will be held in a tent. The restrictions, Bibber says, are based on the governor’s guidelines, though those guidelines have allowed for restaurant dining rooms to open at 50 percent capacity.

Six mourners is impossible for the Velasquez family. Joseph left behind a wife, six children, a grandchild and his parents — all of whom live in the same house together. His brother Phillip, who is coordinating arrangements, has a wife and four children of his own but has volunteered to stand aside so Joseph’s widow, children, grandchild and parents can bury his brother. Ten is all he asks.

“I’ve buried a lot of brothers before,” he said on a phone call late Friday night, thinking back on his years in Iraq and Afghanistan. “But they need to be there.” New Mexico Gov. Michelle Lujan Grisham has not responded to repeated requests for comment. This week, a general officer in the National Guard reportedly reached out to the governor on behalf of the family and was reportedly told to have Phillip contact the governor’s office regarding an exception for the immediate family. When Phillip was able to get in touch with the staffer reportedly assigned to help the family’s situation, the staffer told him he had no specific updates and “the public health situation would dictate” the guidelines for his brother’s burial.

“My office is working with the state and the family to see how we can be helpful,” a spokeswoman for the the Velasquez family’s congresswoman, Rep. Deb Haaland, told The Federalist on Sunday. “As the daughter of a Marine Corps Vietnam War veteran who is buried at Arlington National Cemetery, I know how important it is for the family to honor our veterans when they pass away.” On Thursday, Haaland called Phillip personally, telling him she thinks her office is working on it. It was his first successful contact with her office, and he has not heard anything since. 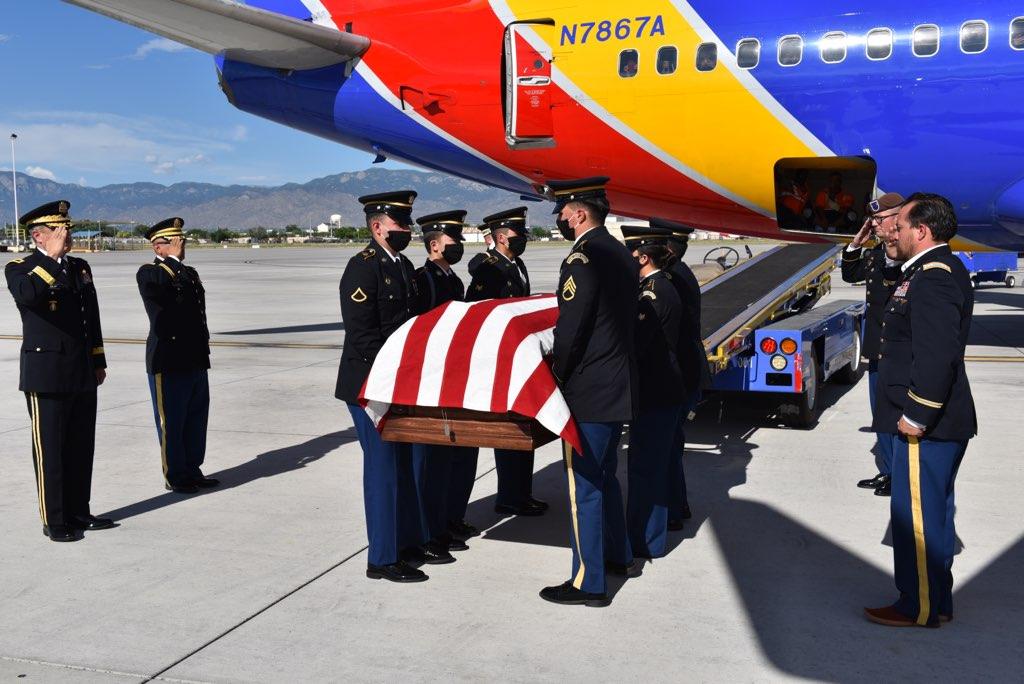 When The Federalist reached out for an update on Friday, the congresswoman replied, “Mr. Velasquez and I shared a heartfelt conversation this week. I know how difficult this time has been and how hard it is to lose a loved one who has served our country – I always think about the sacrifices my dad made in Vietnam and the sacrifices all our veterans and their families make to keep our country safe. We were informed that the cemetery has increased the number of attendees at funerals.”

The number hasn’t actually changed. Technically 25 are allowed: six at the burial, 19 can view from the parking lot.

Ten days ago, on June 9, Haaland joined hundreds of mourners at the Houston funeral of George Floyd. “This is a point in our country’s history,” a representative for her office told New Mexico news station KRQE, “where change should absolutely happen.”

“After learning of this matter, our office immediately contacted others in the delegation and learned that Rep. [Deb] Haaland and Sen. [Martin] Heinrich were actively working to resolve the issue with the Velasquez family, who are constituents of Rep. Haaland,” a spokeswoman for Rep. Xochitl Torres Small, who represents southern New Mexico, wrote in a June 13 email to The Federalist. Heinrich’s office, however, has not reached out since a June 3, when a constituent representative told Phillip he did “not have any current updates.”

Heinrich’s colleague, Sen. Tom Udall, has neither replied to the family nor requests from The Federalist to comment. A spokeswoman complained about inaccuracies in Monday’s article, but declined to list them.

The family’s casualty officer had some good news Thursday night, telling Joseph’s parents the good news that he had received permission for a full honor guard instead of the currently restricted three-man guard.

Neither Gov. Lujan Grisham’s, Sen. Heinrich’s nor Sen. Udall’s offices responded to The Federalist’s requests for an update.

New Mexico is a blue state, and its national offices are dominated by members of the Democratic Party.

A Lifetime Of Service

Joseph and Phillip grew up in a tradition of service. Their father, Phillip Sr., a San Felipe Pueblo Indian, served in the U.S. Army for 20 years, including three tours in Vietnam. The brothers grew up in a neighborhood of Albuquerque then called “The War Zone,” and counted themselves lucky to get out, following their father into service in 1999. “I never thought that my brother would be in a position where he was greeted as a master sergeant,” Phillip told The Federalist in a June 12 interview, “and offered the position as the operations sergeant major for the Military Advisor Training Academy, which he technically wrote the book on for their course instruction.”

Between the two brothers’ eight tours, Phillip estimates their mother endured nearly eight years with a yellow ribbon tied in her yard, waiting for a son to come home safely. On May 22, Joseph was struck and killed in a hit and run while walking home on a scenic country road north of Ft. Benning. In the weeks that followed, his brother reached out to every politician in New Mexico, but empty offices, filled voicemails and silence were all he had heard.

“I love my brother,” Phillip, 40, told me over the phone. “I mean, we shared the same bathwater together. Fifteen months apart.”

“I want to pay [myself] for the bugle, bagpipes, and drummer to sing ‘Amazing Grace,’ and so many people want to support this. But I’m getting pushback from the organizations that should be actually the ones leading this.”