While the Senate looks to be breaking in one direction, gubernatorial mansions across the country appear poised to swap parties. Republicans have a batch of vulnerable governors, but none are as embattled as those in Pennsylvania, Maine, and Florida. Their stories couldn’t have been more different four years ago: Tom Corbett crushed his opponent, a damaged Rick Scott squeezed past Alex Sink, and Paul LePage came out the victor in a three-way fight. Now? Let’s take a look.

There really is no kind way to put this: Tom Corbett is going to get crushed by Tom Wolf. His approval ratings have been atrocious for months: Be it thanks to his involvement in the Penn State scandal, education cuts, various tax and fee hikes, workarounds on Medicaid expansion, or just facing a tougher opponent than the disastrous Dan Onorato, the doomed governor simply can’t catch a break. Initially leading in polling at the start of 2013, he collapsed and trails Wolf badly: With less than 100 days to go, and absolutely no change whatsoever in the horse race, it will be tough for Republicans to justify sending money to his aid when they have less vulnerable incumbents and potentially vulnerable Democratic governors to help or destroy, so a funding surge is highly unlikely to come his way. The gap may close as polling converts to likely voters, and midterm elections are winnable for Republicans in the Keystone state (even the most competitive Republican-held House seat there is projected to stay red), but this is a deficit too large, too lasting, and irreversible. Republicans missed an opportunity here to primary a doomed man in the hopes of holding a state essential to their long-term survival.

Paul LePage enjoyed a divided moderate/liberal vote in 2010 and snuck in on the Red Wave, and has never been a particularly popular governor. His approval rating has hovered around or below 40 percent for most of his term in office, and in the polls conducted for this cycle he seems to have a tough time cracking that: 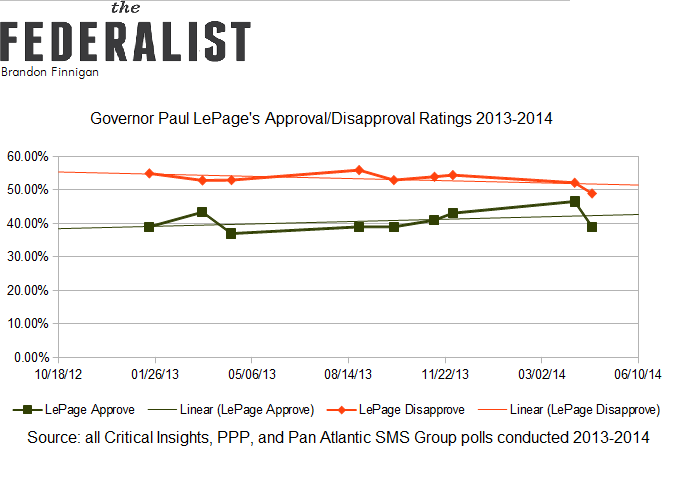 So why is LePage, who is facing negative ratings like Corbett, still technically in this, while his fellow Republican Governors Association member in Pennsylvania is ruined? LePage is enjoying an “old friend” from 2010: Eliot Cutler, an Independent whose run last time aided LePage’s victory and who seems determined to do it all over again. Cutler has been siphoning off enough of the liberal Southern Maine vote from Michaud (who represents ME-2 and trails LePage slightly there) to keep LePage in the game. Indeed, LePage performs best when Cutler does: In the event Cutler drops out and endorses Michaud, the race changes to likely Democratic. He hasn’t been enjoying the same hype and fundraising as he did four years ago, and his numbers have gradually shrunk as the race has dragged on, so the pressure will be on him to do just this. But until this happens, Michaud enjoys a small lead with the uncertainty of the three-way race keeping LePage in the game.

If his first term was any indicator, Scott, who barely squeaked into the office back in 2010 while fellow Republicans in his state surfed into their seats, should be a dead duck. His fight with the base on Medicaid expansion, his administration’s involvement with the Zimmerman trial, his early scandals, and lingering bitterness from the 2010 primary fight have handicapped him. The Florida Governor’s Mansion has been a top target for Democrats, so they naturally nominated a popular ex-Governor (and ex-Republican and ex-Independent) to challenge: Charlie Crist. Crist started off in this race with a substantial lead, but an odd thing has happened since: It’s so odd, in fact, it deserves its own write-up.