The Biden administration changed the definition of ‘willful’ to shut down gun stores over good-faith mistakes, but one dealer is fighting back.

A Texas firearms dealer is suing the Biden administration for weaponizing the Bureau of Alcohol, Tobacco, Firearms, and Explosives to shut down law-abiding gun retailers over paperwork errors discovered during audits.

President Joe Biden ordered the Department of Justice in June of 2021 to enforce “zero tolerance for willful violations of the law by federally licensed firearms dealers that put public safety at risk,” but after a 500 percent increase in federal firearm license revocations for retailers over the last year, it’s clear the Biden administration isn’t just going after gun sellers who intentionally violate the law.

Punishing minor slip-ups, the lawsuit argues, draws on a drastically different interpretation of the law than the definition federal courts have held based on the Gun Control Act of 1968.

The lawsuit, to which the federal government has 60 days to respond, also argues that the Biden administration’s new policy sets an unreasonably high standard that is not applied to any other industry.

“There’s no business that you walk into today in this country where they don’t make a mistake,” Cargill told The Federalist. “Everyone makes mistakes. It’s not fair — it’s not right — to single out gun stores, which is what I see this current administration doing right now.”

Cargill hasn’t been suspended by the ATF yet, but like every other law-abiding gun retailer, he fears he could be the next victim of the Biden administration’s anti-gun rampage. That’s problematic because not only does he sell guns, but he also offers safety and training courses for legal firearm owners.

“If we make a mistake here in the gun store, then they’re saying they can totally shut me down? That’s not right. We’re trying our best to do exactly what we’re supposed to do. We’re trying to dot our I’s and cross our T’s to make sure that we’re doing everything right,” Cargill said.

Cargill said he always contacts the ATF when he finds errors or has a problem because he firmly believes in operating up to federal standards. Siccing the ATF on law-abiding gun retailers like him over clerical mistakes that can be easily rectified, Cargill said, only damages that working relationship.

“The gun store is supposed to be the database for law enforcement, for the ATF. We’re supposed to work in partnership with each other, not at each other’s throats [as] enemies of each other,” Cargill said. “I should feel comfortable when they walk in to inspect us knowing that [if] they found something wrong, they’re going to guide us in the right. They caught it so we can fix it next time.”

In May of 2021, the ATF website clearly stated, “Some regulatory violations of the GCA pose inherent public safety risks and, when willfully committed, will result in ATF taking action to revoke the license of the offending FFL.”

“Willfulness is not defined in the regulations, but is defined by case law to mean the intentional disregard of a known legal duty or plain indifference to a licensee’s legal obligations,” an archived version of the ATF’s “Revocation of Firearms Licenses” webpage states. “If an FFL has willfully violated the law, shown an intentional disregard for regulatory requirements, or knowingly participated in criminal acts, revocation (or taking away their license) often becomes the only option.”

The webpage also clarified that “ATF does not revoke licenses for every violation found during compliance inspections.”

“It is rare that the process of taking away a license is started unless an FFL has been educated on the requirements of the laws and regulations and given an opportunity to voluntarily comply with them, but has failed to do so,” the webpage continued.

On June 23, 2021, Biden, who had promised since he was on the campaign trail that he would take aim at the gun industry, demanded the DOJ initiate a “zero tolerance for willful violations of the law by federally licensed firearms dealers that put public safety at risk.”

By July 14, 2021, ATF Acting Assistant Director of Field Operations George Lauder instructed all special agents in charge and directors of Industry Operations to adhere to the guidelines for this new crackdown.

That’s problematic, Matt Miller, senior attorney at the Texas Public Policy Foundation and lead counsel for this case, told The Federalist, because the ATF “has started to claim that 15 or 20 violations constitute evidence of willfulness, even if you sold thousands of guns that year.”

“It doesn’t matter that they were just paperwork errors that didn’t result in a prohibited person obtaining a firearm. If someone simply writes ‘USA’ on the ‘County’ line because they misread it as ‘Country,’ that’s a violation,” Miller said.

Error-free work, Miller added, is “virtually impossible to meet when accounting for the volume of transactions that Plaintiffs complete.”

“I would challenge any business or a lawyer who has submitted briefs to have truly error-free work product. We all strive for it, but it’s not realistic. Congress understood that. That’s why they put the word ‘willful’ in there. [The Biden administration] enacted what is effectively a zero-tolerance approach toward these gun dealers,” Miller said.

The ATF website, which was updated to reflect the new policy, openly admits that “relatively few FFLs engage in such conduct” and claims that special agents will work to correct issues with gun retailers who commit violations that “are the result of inadvertence or administrative mistakes.” This includes intentional violations of gun laws such as “Transferring a firearm to a prohibited person,” “Failing to conduct a required background check,” “Falsifying records, such as a firearms transaction form,” “Failing to respond to a trace request,” and “Refusing to permit ATF to conduct an inspection.”

Anecdotes and data, however, suggest that the premier gun regulation agency has initiated a sweeping crackdown on firearm dealers for reasons beyond the illicit activity outlined on its website.

“This new definition of ‘willful’ violates the plain language of the governing statute and puts all law-abiding licensees at risk of revocation for paperwork errors that do not pose a threat to public safety, nor result in prohibited possessors obtaining firearms,” the lawsuit states.

As The Federalist documented in June of 2022, this policy adaptation resulted in a 500 percent increase in the number of federal firearm dealers who were forced out of business by the ATF over unintentional record book mistakes.

A coalition of 25 Republican representatives also took notice of the crackdown. Their June 29 letter pressing the ATF to answer for reports that agents “feel pressured to take actions against individual businesses that they do not feel are appropriate or are in the interest of public safety,” however, proved to be futile.

All of a sudden, law-abiding gun store owners all across the nation faced unprecedented suspensions for paperwork and transactions with legal firearm purchasers.

In New Jersey, a gun dealer with more than a decade of experience and no prior problems was shut down after the ATF found a handful of his customers marked “USA” as their county on form 4473, the federal firearms transaction record used to initiate a background check. The ATF also took issue with the fact that firearms were transferred to “three customers more than 30 days after they had signed the 4473.”

“To be clear, all the customers passed their background checks. None were prohibited persons, and the ATF never seized the firearms from the three customers,” The Truth About Guns reported. That didn’t stop the ATF from shutting down the store for good.

Similarly, a family gun store in Florida was suspended after the ATF claimed their accidental clerical errors fell under the Biden administration’s new definition of willful.

Shutting down gun retailers is a priority not only for the Biden administration. The corporate media have also been looking for excuses they can use to force Democrats’ hand on gun control.

One month prior to the introduction of Biden’s “zero tolerance” policy, USA Today partnered with anti-gun groups The Trace and Brady to release data they claimed shows the “ATF Routinely Lets Problem Gun Dealers Off Easy.”

Their intent, as clearly stated in the article, was to expose how “A single violation is enough to shutter a gun shop if ATF officials can prove that the store willfully broke federal regulations.”

Now that the ATF admits it revoked federal firearms licenses at a higher rate this year than in any year since 2006 and revoked the highest number of licenses since 2008, USA Today and The Trace are gloating.

“ATF crackdown on ‘rogue gun shops’ appears in new data,” an Oct. 5 story from USA Today and The Trace stated.

Cargill knows the Biden administration and media are allied against him, but he said he believes in this case and is willing to do whatever it takes to stand up for Americans’ Second Amendment rights.

“There’s always going to be some type of fallback or backlash or anything with anything that you do,” Cargill told The Federalist. “But the majority of U.S. Federal Firearms License dealers that are out here are mom-and-pop stores. We’re trying to do our best to provide a service to the public and to make sure we’re following federal guidelines.” 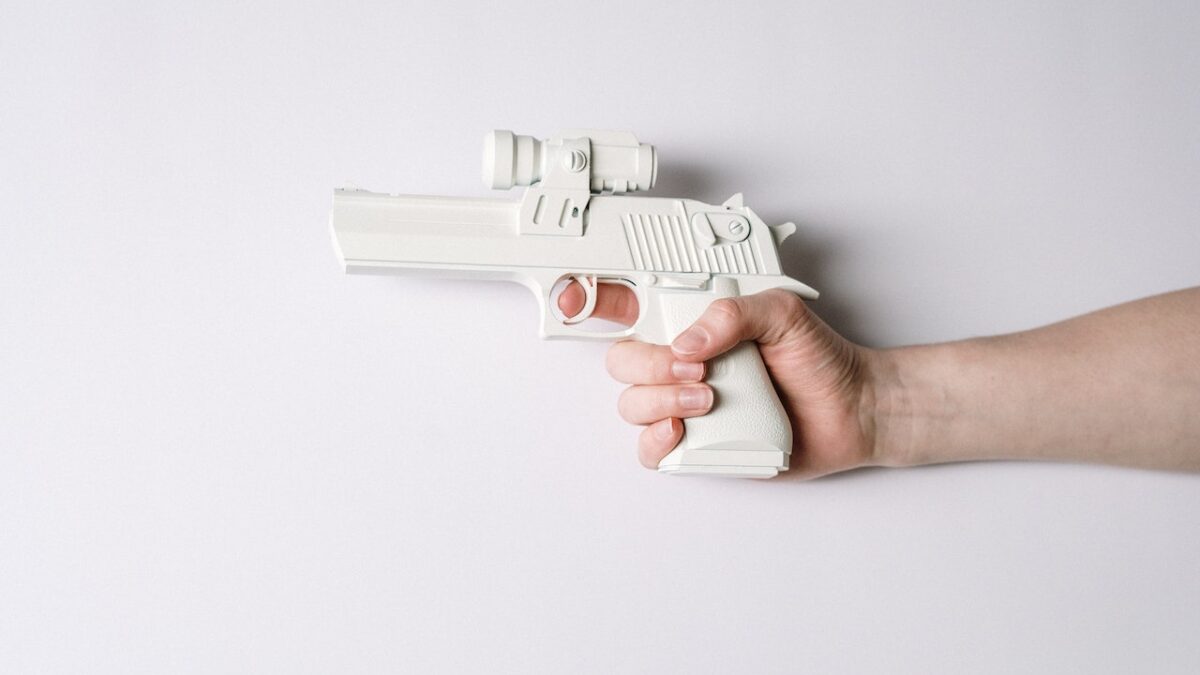