Right up the road from Los Angeles and tucked away in the desert between mountains and the City of Angels lies Bravery Brewery Company in Lancaster, a city on the edge of Los Angeles County. The brewery is a hotspot for veterans who feel celebrated by founder and co-owner Bart Avery’s flag tribute and picture display honoring U.S. veterans and troops such as his grandfather who died in World War II.

The newest addition to the brewery’s walls features pictures of the 13 U.S. service members who lost their lives in Kabul, Afghanistan after President Joe Biden, whose administration has endorsed Newsom, rushed to withdraw troops. Their pictures appear above the brewery’s slogan “Live your life with bravery.” Bravery isn’t just the name of Avery’s brewery, which was named for his son Brian Avery. It’s also a standard by which the Lancaster resident lives.

Avery first found internet fame in February after The Federalist and other outlets reported that Los Angeles County inspector Jatinder Chhabra danced in the Bravery brewery tasting room after demanding a Bravery employee shut down the building operations immediately due to a COVID-19 restriction she wrongly interpreted. The employee had to leave customers waiting on their freshly brewed pints after Chhabra ordered an authorized individual at Bravery to fill out nearly a dozen bureaucratic forms filled with language fueled by COVID security theater.

Owners of @BraveryBrewing gave me permission to post a video on superbowl a LA County health inspector Jatinder Chhabra wrongfully shutdown the business for several hours. She then dances in celebration. Bravery Brewing was just featured in our documentary last month. pic.twitter.com/gJVEMEgtqV

During the height of COVID restrictions, Avery said the brewery was also forced to dump kegs of their precious beer out after local restaurants and stores stopped serving customers to comply with lockdown orders.

“I think that we have a business that’s located in probably, during COVID, arguably the worst state in the union to try to survive unless you’re Costco, which is ironically, less than a mile from here and they were open all the time,” Avery told The Federalist. “We live where we operate in the worst county, in my opinion, in the United States, Los Angeles County, and the restrictions they had on us were almost impossible to deal with.” 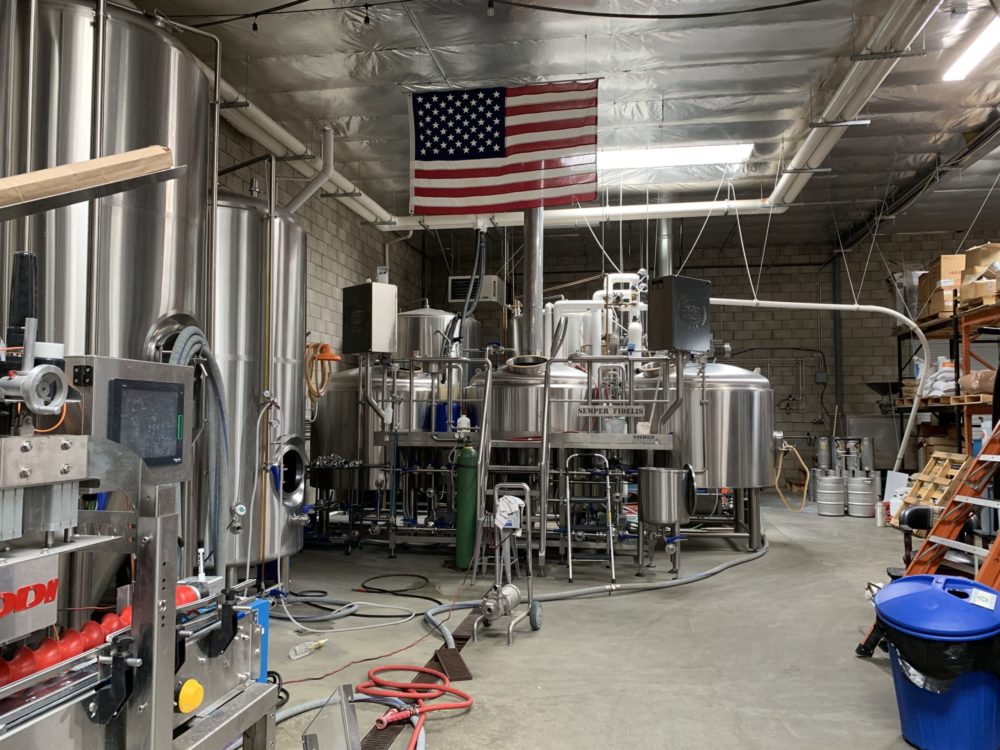 When LA County repeatedly moved the goalposts on what it took for breweries and bars to reopen, Avery and his son took their business to the next level by opening a pizza restaurant inside their tasting room to meet the California requirement to serve “bona fide” meals.

After six months of renovating their offices into an industrial kitchen suited for handcrafting dough and cutting up fresh ingredients, Bravery Brewery welcomed families, veterans, and other customers to enjoy freshly baked pizza pies with a pint or two of the beer brewed in a warehouse right next door.

“Our sales have pretty much doubled from what they were pre-COVID because now more people are coming in, people are bringing their kids and stuff to have pizza,” Avery said. “We’re going to, we’re going to add salads to the next year, pretty soon, which is going to open up more people who want to come in but they’re healthier that don’t want to eat pizza. It’s something that we never would have just done on our own without the whole COVID thing.”

Even with rising sales, Avery said understaffing is an issue for valley businesses like his. At the beginning of the pandemic, Avery said he was forced to lay off nearly 90 percent of his staff to keep Bravery Brewing alive until it got back on its feet with grants from the county and federal government. Now, as Bravery continues to expand, Avery and other local business owners are practically begging Lancaster and Palmdale residents to work for them.

“We’ve we actually hired people and then the next day they call and say ‘You know what, nevermind. I changed my mind.’ And who knows, maybe they got a better job offer. Maybe they thought, ‘I’m just gonna stay on this unemployment for a while longer.’ I don’t know but it’s totally changed from pre-COVID where people begged us to work here essentially because it’s a cool place to work,” Avery said. “Our servers make good money and we have a good reputation in the valley, but the employment picture is kind of bleak.”

Local and chain businesses strewn across the southern California coast also are struggling to find people to work. Some are offering base wages higher than the state’s minimum wage of $14 an hour and “benefits” such as flexible scheduling, insurance, and 401(k)s. While Avery said his brewery is on track to recover even as LA County COVID restrictions linger, the family business is not “out of the woods yet.” The looming threat of another round of lockdowns as endorsed by the president and California bureaucrats in LA county including Newsom, Avery said, worries him and his wife, who hasn’t taken a paycheck for her sales role in the company in more than a year.

“I don’t know if I could psychologically handle another complete shutdown,” Avery said. “The last four or five, they never gave an end date. I remember at the very beginning they said something like ‘Two weeks to flatten the curve.’ I remember they shut us down on March 15, which was two days before St Patrick’s Day which is a huge day for us, and I thought, ‘Oh my gosh well we’ll just do St. Patrick’s Day, you know, a couple of weeks later.’ Well of course that never happened.”

“My wife was crying herself to sleep at night for so many weeks. It just puts so much stress on our lives,” he continued. “You wake up every day just worrying about all the employees who would call us and say ‘What do you think? Can you get us back in there because I can’t make my car payment.’ Heartbreaking stuff like that.”

These worries, Avery believes, play a large role in how business owners are perceiving the upcoming gubernatorial recall election.

“I think if Larry Elder wins and Gavin Newsom actually does get recalled, I don’t see him putting in draconian measures…if Gavin Newsom wins, I don’t think there’s anything that’s gonna stop him. He’s not gonna bat an eye. He’s just gonna do what he wants to do and I know I’m getting a little political with that but I think it’s common sense. Look at his track record,” Avery said.

Frustrations surrounding this hiring crisis follow a year of unstable sales and thousands of worries but, according to Avery, the true tipping point for Californians who were already uneasy about the governor’s pandemic restrictions was when Newsom was caught maskless dining indoors at a fancy French restaurant.

“That was a game-changer I think to everybody,” Avery said. “I’m kind of glad it happened because it just shows the hypocrisy. It’s like Nancy Pelosi walking around in a beauty salon without her mask on and a day before chastising all of us. I just wish our politicians would follow their own rules…it’s like come on guys, get your act together.”