Democrats and their allies in the media are ready to condemn riots now that the turmoil has shifted to fit their narrative.

On Wednesday, a mob of Trump supporters stormed the U.S. Capitol building. It was an astonishing display of anarchic protest that delayed congressional certification of the Electoral College vote formally handing former Vice President Joe Biden the keys to the White House.

The scenes from the dark day of disaster demonstrations illustrated a deteriorating country, repulsed millions, and traumatized a nation still recovering from the death, despair, and disruption that came to define the dystopian months of 2020. Above all, what happened Wednesday served as a grim reminder that the institutional stress test of 2020 has followed us into 2021.

For the left, however, the chaos at the Capitol has opened an opportunity to refute the perception they own the monopoly on widespread political violence. Democrats and left-wing media elites have already capitalized on the violent outbreak, where four people died, to characterize conservatives as the creatures of chaos.

At this point, it’s undeniable that the political far-right calls home to its own Antifa-like anarchists. It is also undeniable, however, that reaction to the protests from conservative leaders roundly condemning the violence from their own side stands in remarkable contrast to the way Democrats and corporate media spent months going out of their way attempting to justify the deadly actions of militant leftists.

Not one prominent conservative pundit or politician with any significant platform was reported to have tried endorsing the mob of Trump supporters infiltrating the U.S. Capitol. To the contrary, conservatives spent months vilifying Democratic leaders for not doing enough in their own states and cities to crack down on the militant mobs of leftists taking streets under siege, normalizing the kind of political violence on track to appear routine in the nightmare 2020 decade.

It was only seven months ago that Washington D.C. was last on fire.

Reminder that our nation's capital looked like this at the beginning of the summer and most Democrats/media shrugged it off as mostly peaceful https://t.co/1zvsLVRuQc

A trip down memory lane chronicling the left’s reaction to last year’s eruption of unrest claiming the lives of at least 30 people not only exposes the hypocrisy suffusing Democrats’ condemnation of political violence, but also illustrates a sobering reality that there’s plenty of blame to go around for the situation in which the United States now finds itself. 2. Chris Cuomo: Who Said Protests Were Supposed To Be Peaceful?

CNN’s Chris Cuomo showcased his ignorance of the First Amendment in June when dismissing the idea that militant protests sweeping the nation in the aftermath of George Floyd’s death were illegal.

“Please, show me where it says protesters are supposed to be polite and peaceful,” Cuomo demanded.

Here’s the text from the First Amendment, emphasis added:

Congress shall make no law respecting an establishment of religion, or prohibiting the free exercise thereof; or abridging the freedom of speech, or of the press; or the right of the people peaceably to assemble, and to petition the Government for a redress of grievances.

CNN's Chris Cuomo: "Please, show me where it says protesters are supposed to be polite and peaceful."

As riots and looting have broken out in cities across the country, this is the message the brother of New York governor Andrew Cuomo shares at the top of his show. pic.twitter.com/ZZ47zpyVlx

MSNBC’s Ali Velshi stood in front of a liquor store burning behind him in Minneapolis and called the riots surrounding the camera crew “mostly a protest” that is “not, generally speaking, unruly.”

“But fires have been started,” Velshi made clear to note.

CNN continued to parody itself in August as a second wave of mass unrest swept the country with Kenosha, Wisconsin as its focal point. After the label “fiery but mostly peaceful” had become a trolling phrase online to describe legacy media’s coverage of the summer riots, the network literally adopted the words to describe events unfolding in Kenosha while a reporter stood in front of a several burning vehicles.

For anyone doubting this is real: pic.twitter.com/3VGuGCDfAi

Democrats went through their entire online convention without condemning the epidemic of left-wing violence that engulfed the nation in the preceding months.

The New York Times’ architect of the “1619 Project,” Nikole Hannah-Jones, explicitly rejected the idea that destroying property fits the definition of “violence.”

“Destroying property, which can be replaced, is not violence,” Hannah-Jones said on CBS, to which the anchors offered no challenge.

Hannah-Jones also said it would be “an honor” for 2020 riots be deemed the “1619 Riots” despite destroying minority businesses.

PBS White House Correspondent Yamiche Alcindor tried and failed to fact-check President Donald Trump in May, apparently faulting the president for not providing any evidence when calling the anarchists terrorizing cities “anarchists.”

“These people are anarchists,” President Trump says without providing any evidence. https://t.co/P7HGwsbKWD

“And let’s not forget if anyone is judging this, I’m not judging this,” Lemon said as CNN cameras rolled with footage of riots in Washington D.C. and Los Angeles. “This is how this country was started.”

“Our country was started because, the Boston tea party. Rioting. So do not get it twisted and think this is something that has never happened before and this is so terrible and these savages and all of that. This is how this country was started” –@DonLemon on @CNN 11:53 PM ET. pic.twitter.com/dGu5TmArsp

New York Times columnist Nicholas Kristof penned an op-ed in July headlined, “Help Me Find Trump’s ‘Anarchists’ In Portland,” in which he actually appears to find them.

"Sure there are anarchists and antifa activists in the Portland protests, just as there are radiologists and electricians, lawyers and mechanics."

The "riots" are not Black Lives Matter marches gone wrong. Armed white nationalists are mobbing these cities to take advantage of protests and scare fellow white people into quietly siding with them. It's an old, tried and true strategy: using fear & anti-blackness for politics.

The Huffington Post published a brief four-minute mini-documentary outlining “How Riots Built America” to draw parallels between the 2020 riots against police with periods of unrest throughout American history.

This will guide our reporting in MN. “While the situation on the ground in Minneapolis is fluid, and there has been violence, it is most accurate at this time to describe what is happening there as "protests"–not riots.”

14. Seattle Mayor On Anarchists Taking Control of Downtown: Don’t Be Afraid of Democracy

Seattle Mayor Jenny Durkan returned fire on Trump in June when the president demanded an end to the city’s partial occupation by socialist protestors.

“Seattle is fine,” Durkan wrote on Twitter despite the insurgency. “Don’t be so afraid of democracy.”

Seattle is fine. Don’t be so afraid of democracy. https://t.co/o26PkJnYhA

Washington Democratic Gov. Jay Inslee was caught being completely oblivious to the anarchist insurrection taking over his state’s largest city when he was asked about the rogue militia during a coronavirus press briefing.

Jay Inslee had no idea anarchists were overrunning his state’s largest city.

“That’s news to me,” he said when asked about #CapitalHillAutonomousZonepic.twitter.com/cDwqzEZq6b

16. Pelosi When Mobs Tore Down Statues: ‘People Will Do What They Do’

House Speaker Nancy Pelosi just shrugged when asked about a militant mob tearing down the statue of legendary explorer Christopher Columbus in Baltimore in June 2020.

“People will do what they do,” Pelosi said.

Journalist referencing the removal of a Columbus statue in Baltimore: "Shouldn't that be done by a commission or the city council, not a mob in the middle of the night throwing it into a harbor?"

Pelosi: "People will do what they do." pic.twitter.com/0OVeaIw2y6

The Democratic leader likely had a different reaction Wednesday at the sight of a random Trump anarchists lounging around in her own office.

Is this really some guy just kicking it in Pelosi’s office? pic.twitter.com/PUqyXJtslZ

Rolling Stone Magazine re-published a 2014 article first out following the Ferguson, Mo. riots in 2104 titled, “9 Historical Triumphs To Make You Rethink Property Destruction,” promoting the devastation as progress in May last year. The “historical pedigree of property destruction as a tactic of resistance is long and frequently effective,” the authors wrote.

19. Slate: Riots Are A ‘Proportionate Response’

Time Magazine published a piece in June headlined, ‘A War of Words.’ Why Describing the George Floyd Protests as ‘Riots’ Is So Loaded.”

You can’t govern a nation with two sets of rules. https://t.co/nCpedTALdx

24. Jacobin Magazine: Looting Is Justified Only For Social Justice

The left-wing publication also published a piece headlined, “When Rioting Works,” in June.

25. AOC: The Whole Point of Protesting Is to Make People Uncomfortable

This is what Rep. Alexandria Ocasio-Cortez, D-N.Y., said about rioting in December 2020. Her staff began trying to get Twitter to stop people from retweeting images of this in the wake of the Wednesday riots. 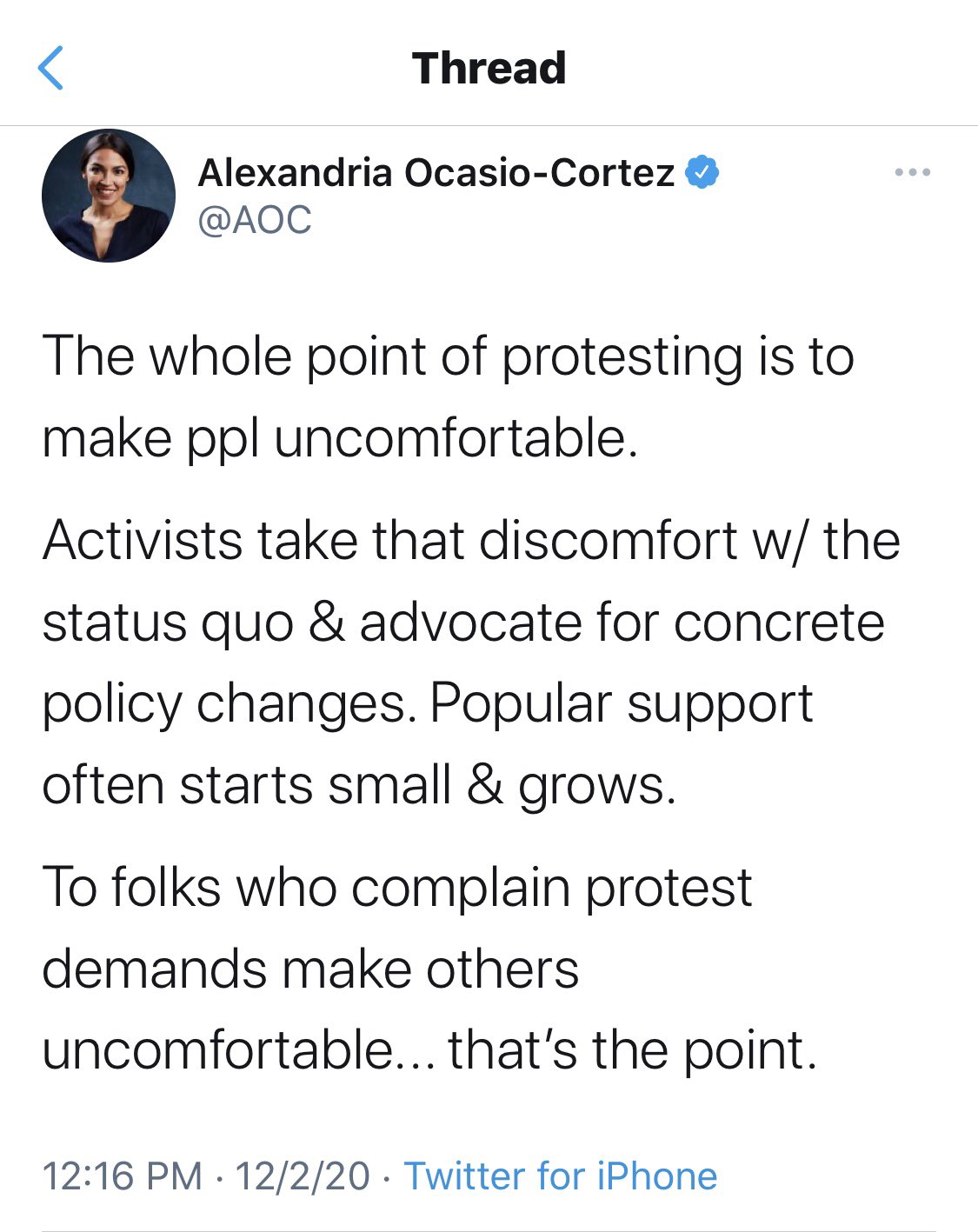 Writer Vicky Osterweil published a book late last summer titled, “In Defense Of Looting,” and earned a feature in National Propaganda Radio (NPR) for the work.

27. NPR Guest: Floyd Demonstrations Are Acts Of Rebellion, Not Riots