Since it has been established that Big Tech’s censorship often targets the truth, its clampdown on discussion of electoral integrity indicates it is indeed a concern.

Twitter is censoring conservatives sharing information and opinions about the election, reinforcing the expected big tech bias against dissenting voices. Since it has been established that Big Tech’s censorship often targets the truth — such as the recovered Hunter Biden laptop, whether research backs mask mandates, the efficacy of certain anti-COVID drugs, the Russiagate coup attempt — its clampdown on discussion of electoral integrity indicates it is indeed a concern.

The Federalist’s John Daniel Davidson wrote an article breaking down some of the suspicious activity associated with key states, headlined “Yes, Democrats Are Trying To Steal The Election In Michigan, Wisconsin, And Pennsylvania.”

Twitter censored The Federalist’s tweet of this article, prohibiting any shares, likes, or comments. The label on the post claims that the article contained “disputed” or “misleading” information related to the election. Twitter's warning atop this @FDRLST article baselessly claiming that Dems "are trying to steal the election" marks the first time that a US media outlet's main account has been tagged with an election results label. pic.twitter.com/gPzFjRzQsZ

Davidson’s article, however, simply breaks down some of the significant voting discrepancies that have been raised as multiple battleground states continue to be uncalled and undecided.

Earlier in the day, Twitter censored The Federalist Co-Founder Sean Davis multiple times, preventing people from sharing or interacting with some of his tweets, for simply restating Pennsylvania’s supreme court decision declaring that all ballots received after election day, including those without a postmark, will be counted.

“Pennsylvania’s top court said that all ballots received after election day — even those without a postmark — must be assumed to have been cast by election day,” Davis said in a retweet of National Review Senior Writer David Harsanyi, who stated that “PA is allowing post-election day ballots. It’s a fact.” 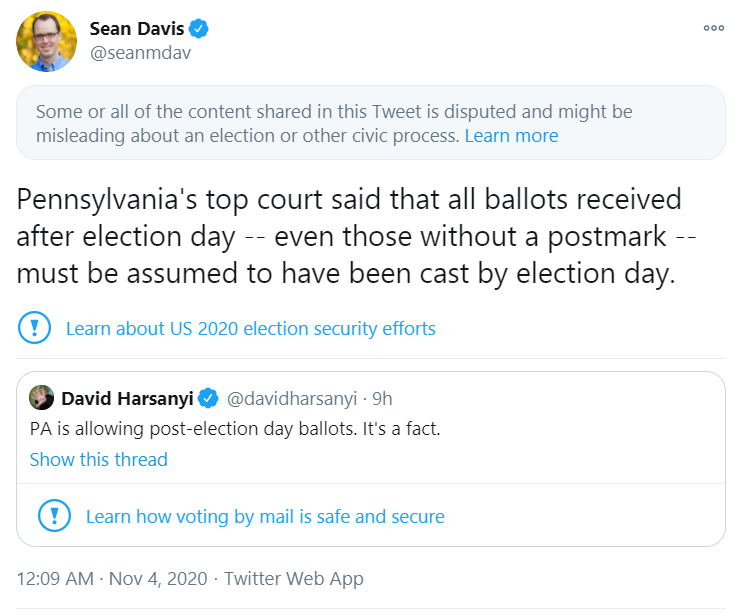 The same thing occurred when Davis pointed out a suspicious vote dump in Michigan that clocked 138,339 votes in the middle of the night all for Democratic presidential nominee Joe Biden. Other conservative voices were also censored by Twitter such as The Daily Wire’s Matt Walsh.

Even the president was censored for claiming that the Democrats are attempting to steal the election. A tweet from Biden claiming that “we’re gonna win this,” however, received no attention from the big tech giant.

The media also criticized Trump for announcing that he won even while states were being counted, but the same scrutiny was not applied when Biden’s lawyer Bob Bauer prematurely declared a Biden victory.

BREAKING: "We’ve won the election. And we're going to defend that election.”

It is clear from these labels, the limited distribution of these posts, and the hypocrisy demonstrated that big tech and the media don’t believe that people can think for themselves. It is also clear that they are heavily invested in preventing the public from discussing or discovering the truth through inquiry and debate, as that often gives people the will to resist political changes imposed through lies.

Instead of admitting that there are still many unknowns in the presidential election, big tech and the media continue to assist Democrats in making a Biden win an inevitability rather than ensuring that all legal ballots are accurately counted so that both sides can trust the election outcome is legitimate.