The only way Democrats remain competitive is if Americans remain convinced that systemic racism is real and dangerous.

“We’re all in for Glenn,” the group reportedly chanted as they invoked memories of the 2017 Unite the Right rally where a clash between white supremacists and counter-protesters turned deadly.

These men approached @GlennYoungkin’s bus as it pulled up saying what sounded like, “We’re all in for Glenn.” Here they are standing in front of the bus as his campaign event at Guadalajara started.@NBC29 pic.twitter.com/l681ejyBjc

Democrats were quick to exploit the demonstration as an illustration that their opponents’ political base was steeped in white supremacy.

“The Unite the Right rally was one of the darkest days in the Commonwealth’s history,” wrote Christina Freundlich, the spokeswoman for Democrat candidate and former Gov. Terry McAuliffe, on Twitter. “This is who Glenn Youngkin’s supporters are.”

Except the demonstration was orchestrated by Democrats.

After Republicans and the entire internet immediately mocked the supposed expression of white supremacist excitement for Youngkin as a likely hoax, suspicions that it was fake were confirmed. Online sleuths called out several of the protesters as Democrat operatives, who quickly made their online profiles private.

The grifter-run operation at the Lincoln Project, built on seducing blue-dollar donors to cloak Democrat attacks as Republican, later claimed (without proof) that it was behind the spectacle.

“Today’s demonstration was our way of reminding Virginians what happened in Charlottesville four years ago, [and] the Republican Party’s embrace of those values,” the group wrote in a statement, despite Democrats apparently having been the ones who had a black man dress up as a white supremacist.

The antics to prop up a candidate down nearly two points in the RealClear aggregate of polls in a state President Joe Biden carried by 10 points a year ago not only mark another exercise of false-flag racism (and in the process, reverse racism), but signal a desperate cling to the narrative of systemic racism to energize the leftist base and intimidate voters.

Never mind it was Virginia’s current Democrat Gov. Ralph Northam who dressed up either in blackface or as a Ku Klux Klansman. And never mind it was President Joe Biden who actual neo-Nazi Richard Spencer, who organized the 2017 Charlottesville rally, endorsed.

After more than a century as the party of slavery and segregation, Democrats have come to embrace a new form of systemic racism in their race-baiting politics and widespread adoption of critical race theory.

Since dismantling the current state of racism has become such a fundamental pillar to the Democrat Party, conceding to reality on the issue would forfeit a lucrative political tool. That’s led the party to aggressively assert that systemic racism against non-white people is endemic, even present within liberal enclaves where Democrat rule is purportedly synonymous with liberation. That’s because, when systemic racism ceases to exist, so does the central mission of the Democrat Party and its favorite attack against Republicans.

The nation’s obsessive focus on race is a product of Democrat engineering, a party advertising “solutions” such as reparations and affirmative action branded as “social justice” with consequences far more detrimental than color blindness. With a lens solely fixated on race, an entire generation is now primed to seek out episodes of racism even where there are none. In a world where cereal boxes, Santa Claus, and even Jesus Christ are racist, what isn’t? When everything is racist, nothing will stop being racist. Under this ideology, the very denial of racism is also deemed racist.

Race relations, meanwhile, have rapidly deteriorated under this leftist narrative that’s now gripped legacy institutions from Hollywood to Wall Street. According to Gallup, just 43 percent of white adults and 33 percent of black adults said relations were “very” or “somewhat good,” a new record low for each group since Gallup began polling on the question in 2001. 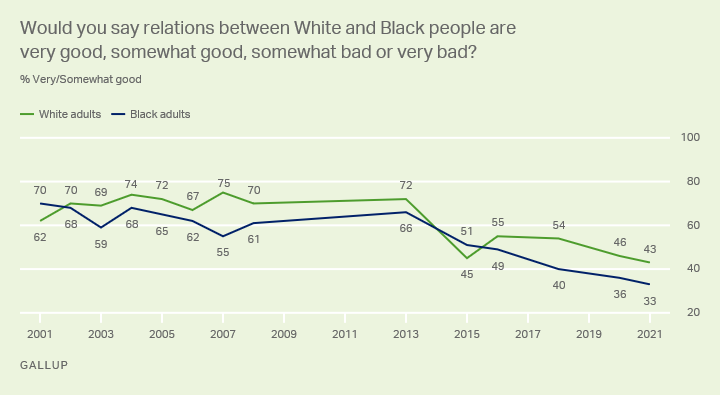 The fake incident apparently orchestrated by the Lincoln Project to indict Youngkin as the candidate of white supremacy reflects Democrats’ need for systemic racism to persist. Republicans’ success in making a blue state competitive on a platform that emphasized the absurdity of Democrats’ racist efforts in schools began to prove it doesn’t.

Out of desperation, then, Democrats have started to fake abhorrent photo-ops to create the preferred narrative they claim to be “warriors” in dismantling.