A primary battle is brewing in Utah, where a pair of NeverTrump Republicans have launched campaigns to unseat incumbent Sen. Mike Lee.

A primary battle is brewing in Utah, where a pair of NeverTrump Republicans have launched campaigns to unseat incumbent Sen. Mike Lee running for a third term.

Former State Rep. Becky Edwards and GOP operative Ally Isom, who served as spokeswoman for Gov. Gary Herbert and The Church of Jesus Christ of Latter-day Saints, have each announced competing candidacies to, in Isom’s word, provoke “a Republican renaissance.”

Outside groups however, have highlighted the time those conservative principles went on vacation and gave way to the worst left-wing culture warrior since President Barack Obama.

In a mailer published by the Salt Lake Tribune, the conservative Club for Growth illustrates Isom driving in a convertible with President Joe Biden, captioned, “Ally Isom took a ‘vacation’ from Donald Trump and the Republican Party.” 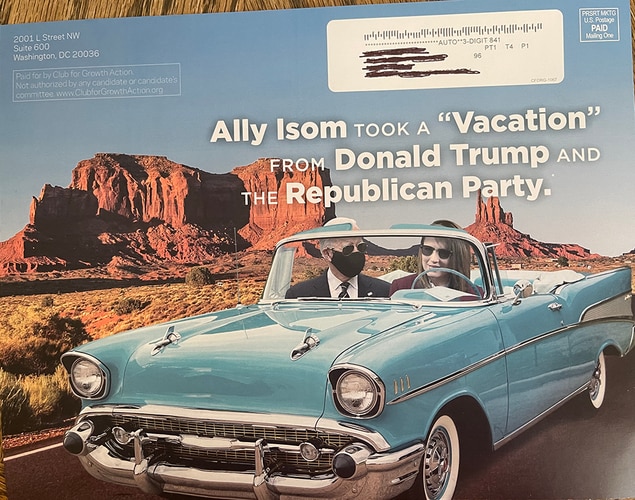 Isom de-registered as a Republican after Trump’s win in 2016, only to re-register in 2020 to vote for Gov. Spencer Cox in the governor’s race.

“Dear GOP, you may have won an election yesterday, but you lost me,” she wrote in a Facebook post after Trump’s triumphant first win.

She actively campaigned against the then-incumbent president last year.

“This November, as women of faith and covenant, we reject the ugly, cruel and corrupt to champion principle, unity, harmony and integrity,” Isom said in a video for the group Women of Faith Speak Up and Speak Out which encouraged voters to opt for another choice.

Edwards also appeared in the clip, according to the Tribune, which appears to no longer be available. While Edwards voted for Biden, Isom hasn’t disclosed who she voted for, telling the local paper that her decision was between her and God.

Each candidate sounds more similar to the state’s other senator, Mitt Romney, who also declined to share his vote but revealed last fall it went to someone other than the president of his own party. Several months later, Romney went on to vote for Trump’s impeachment conviction a second time, after he was the only Republican to vote in favor of it in the first. Edwards said Trump was rightfully impeached in January on charges Lee rejected.

In the Senate, the failed Republican presidential nominee of 10 years ago has branded himself as more than a mere moderate, but rather, a progressive culture warrior for having joined the left in defining moments. Romney joined Black Lives Matter protestors outside the White House, become an upper chamber champion of Wyoming Rep. Liz Cheney who has repeatedly undermined the party, promoted Democrats’ weaponized Jan. 6 commission, and proposed cash-for-kids legislation that, albeit unintentionally, harms the American family.

Romney stands in stark contrast to his more conservative counterpart, Lee, who co-chaired Trump’s campaign in the state last year and has been labeled an “obstructionist” by Isom.

With 11 months out from primary day, the two new candidates appear to be competing for the same constituency more attracted to Romney’s brand of Republican progressivism than Lee’s conservative libertarianism.