The White House released the president and the vice president’s tax returns Monday, revealing the finances of two of the nation’s most powerful couples.

The White House released the president and vice president’s tax returns Monday, revealing the finances of two of the nation’s most powerful couples.

The chart below, which was featured in Politico Playbook, the magazine’s daily newsletter, provides a summary of their 2020 federal returns, documenting each couple’s gross income and tax paid. The table also shows the dollar amounts that each couple gave to charity. 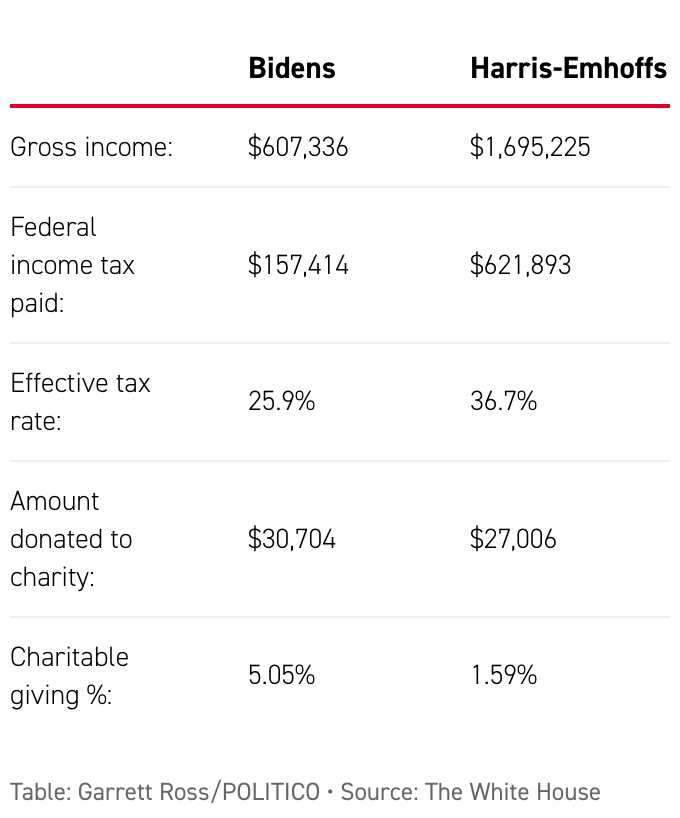 President Joe Biden and Vice President Kamala Harris together with their spouses each donated about $30,000 to charity, according to their tax returns. While that comes out to more than 5 percent of the Bidens’ total income last year, for Harris and Doug Emhoff, who earned an extra six figures over the Bidens’ earnings, their charitable giving amounted to only 1.59 percent.

These totals from both the president and vice president remain low in comparison to others at their income level, according to the Philanthropy Roundtable.

The chart below, featured on the charity group’s page, shows the average percent of income wealthy donors contribute to philanthropic enterprises, based on findings from the Lilly Family School of Philanthropy at Indiana University. At incomes between $500,000 and $2 million, where Biden and Harris fall, the average earner donates more than 8 percent.

Several studies in the past two decades have shown Republicans give more to charity than their Democratic counterparts. In his 2006 book “Who Really Cares,” Arthur Brooks, now a Harvard professor on public leadership who used to run the conservative-leaning American Enterprise Institute, combed through the existing data on charitable giving and found those on the political right give more to charity across income levels than those on the left.

More than a decade later in 2018, New York Times columnist Paul Sullivan came to a similar conclusion. Based on new research, he wrote, “Red counties, which are overwhelmingly Republican, tend to report higher charitable contributions than Democratic-dominated blue counties.”