Like many other Americans over the past several weeks, I have taken the opportunity presented by months-long lockdowns to re-explore online dating. Having spent a fair bit of time on the Bumble app in the past month, I was surprised when I opened it Tuesday morning to find this message: 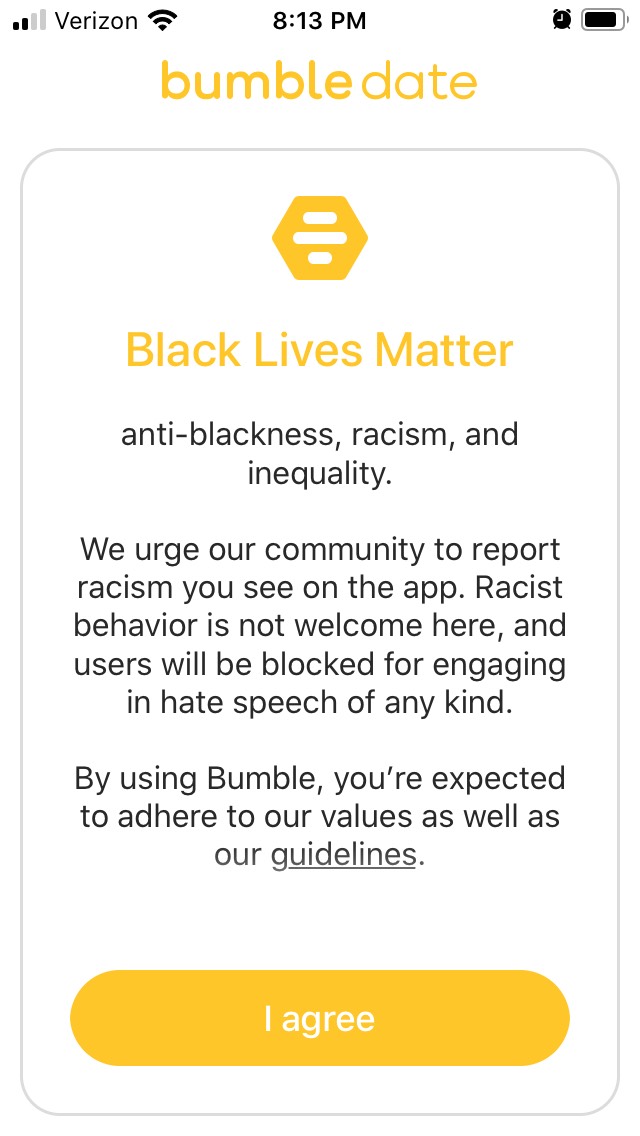 We’ve seen numerous examples of large corporations attempting either not to offend or to cultivate leftist activists. They’ve withdrawn or rebranded content and logos, made donations, and issued videos, among other things. But Bumble’s high-handed tactics represent something far more insidious — and the next frontier for woke activists.

Bumble’s requirement that users abide by its guidelines, refraining from offensive conduct, makes sense. Provided they do so fairly — an issue with some tech companies — private entities should be able to regulate customers’ behavior in their place of business.

In the brick-and-mortar world, no one would expect a shop or restaurant to serve an intoxicated or violent customer, or one who used racist language. Similar standards should apply online. Not only do I not engage in that kind of conduct, I wouldn’t want to use a platform that permitted others to do so.

But Bumble goes well beyond regulating users’ behavior by also regulating users’ beliefs. Note the wording: “By using Bumble, you’re expected to adhere to our values as well as our guidelines” (emphasis mine). Bumble isn’t just demanding its users conduct themselves appropriately — it’s demanding they believe the same things Bumble’s leadership believes.

But what exactly does Bumble believe? The message doesn’t say, but claims, “We must be unrelenting in our anti-racism.”

What “anti-racism” means has shifted a lot since the civil rights movement days of seeking equal treatment before the law. Nowadays, some assert that people are inherently racist simply if they are born with a certain skin color.

Bumble could easily believe racism is defined by someone who wrote a prominent book on anti-racism, touting its tenets in an effort to mainstream them. Ibram X. Kendi, author of “How to Be an Antiracist,” submitted an article to Politico last fall defining an anti-racist agenda. The relatively short piece is worth quoting in its entirely, lest anyone think I take Kendi out of context:

To fix the original sin of racism, Americans should pass an anti-racist amendment to the U.S. Constitution that enshrines two guiding anti-racist principals: Racial inequity is evidence of racist policy and the different racial groups are equals.

The amendment would make unconstitutional racial inequity over a certain threshold, as well as racist ideas by public officials (with “racist ideas” and “public official” clearly defined). It would establish and permanently fund the Department of Anti-racism (DOA) comprised of formally trained experts on racism and no political appointees.

The DOA would be responsible for preclearing all local, state and federal public policies to ensure they won’t yield racial inequity, monitor those policies, investigate private racist policies when racial inequity surfaces, and monitor public officials for expressions of racist ideas. The DOA would be empowered with disciplinary tools to wield over and against policymakers and public officials who do not voluntarily change their racist policy and ideas.

In other words: Kendi’s group of unelected (but “formally trained”) “experts on racism” will have an unchecked veto (at minimum) of all policies at every level of government. If policymakers have the temerity to object to these so-called experts’ actions, the “experts” will have “disciplinary tools to wield over” them if they “do not voluntarily change their racist policy and ideas.”

Andrew Sullivan has called this kind of platform “totalitarian,” and he’s correct. Kendi has proposed a modern version of Leninism or Maoism, with an intelligentsia of woke professors substituting for Lenin’s dictatorship of the proletariat. Just like Bumble, Kendi wants to regulate not just actions and policies, but ideas as well, raising the specter of “anti-racist re-education camps” similar to those of Chairman Mao’s Cultural Revolution.

Bumble wouldn’t say if the company agrees or disagrees with Kendi’s proposals. But if the author of the book on anti-racism has offered these “solutions,” how can a company dedicated to “unrelenting” anti-racism do anything but endorse his platform?

Bumble will brook no opposition to its new woke manifesto. Users can agree, or they can… agree. Users can’t move past that screen onto the rest of the app until they click the “I agree” button, signaling consent not just to abide by Bumble’s user guidelines but also to “adhere to our values” — meaning Bumble’s beliefs about “systemic racism,” whatever they are, and its commitment to anti-racism, however the company chooses to define it.

Bumble users can delete the app from their phone, of course. But to delete their accounts, users must do so on the Bumble app, and they can’t access that without first clicking the “I agree” button, signing on to the company’s political platform. Thus Bumble appears to be holding users’ account information hostage to its political agenda. Users cannot access it, or reclaim it, unless and until they endorse the company’s manifesto.

I emailed Bumble Wednesday afternoon about these issues. I asked whether Bumble would publish the list of “values” to which it expects its users to adhere, whether the company agreed with Kendi’s proposals regarding “disciplinary tools” against “racist policy and ideas,” and whether the company has made its users’ data hostage to the political litmus test it now imposes on its users. So far, the company has not responded.

Bumble’s actions this week represent but the latest attempt by media companies to dictate Americans’ political beliefs, and ostracize anyone who dares contradict the woke mob. Unfortunately, given recent history, Bumble’s actions will likely prove far from the last.