Another week, another grim milestone for Obamacare. A new Gallup poll shows that the law is more unpopular than ever.

A new poll from Gallup shows that Obamacare’s popularity just hit a new low. According to the poll, only 37 percent of Americans say they approve of the law. On the flip side, a whopping 56 percent of Americans say they disapprove of the law, giving President Obama’s signature health care achievement a net approval rating of -19. By way of comparison, its net approval rating barely two years ago, in December of 2012, was +3: 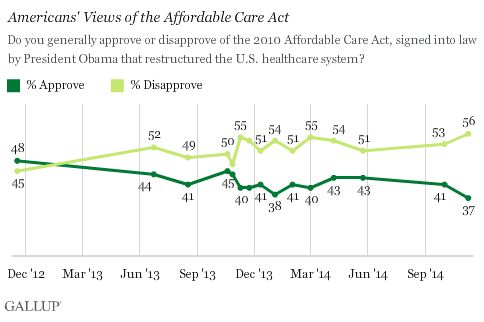 As the Affordable Care Act’s second open enrollment period begins, 37% of Americans say they approve of the law, one percentage point below the previous low in January. Fifty-six percent disapprove, the high in disapproval by one point.

In many ways, Obamacare is basically the Wendy Davis of federal health care laws: the more people learn about it, the more they hate it. Call it the reverse wine effect. It gets worse with age.

Disapproval of the law is not just limited to Republicans, though. Independents also detest the law: If You Can’t Tell A Man From A Woman, You’re Not A Health Official, You’re A Health Threat