In order to make a “libertarian nation” seem like an unrealistic fantasy, the left pretends that 150 years of America’s history doesn’t exist.

I’ve recently been seeing the revival of an odd line of argument I hear from the left now and again. In response to the launch of Rand Paul’s presidential campaign, for example, I heard it said that Paul’s vision for a much smaller government, for eliminating so many agencies and regulations, was a fantasy of a “libertarian country” that has never existed. The implication is that radically smaller government is a new idea that has never been tried.

Similarly, in response to my suggestion that maybe we should stop basing our government on massive, omnipresent coercion of the citizenry, the Washington Post‘s Greg Sargent replied:

@Tracinski @chrisrlloyd @ryanlcooper It is an utter fantasy to imagine a return to pre-industrial state role of govt. A fairy tale.

I’ve tangled with this notion before, and it is an absurdity that has got to stop.

Of course there has been a “libertarian country” before. We’re it. Or at least we were, for roughly the first 150 years of our existence—which, far from being some sort of fairy tale or collective delusion, was probably the most successful period ever in the history of any nation.

It’s the welfare and regulatory state that is a historical aberration. The institutions of modern “big government” were virtually all created in roughly the last century, since the birth of the income tax and the Federal Reserve in 1913, and even then, government did not reach anywhere near its current size until just in the past few decades.

This graph tells the tale of woe. 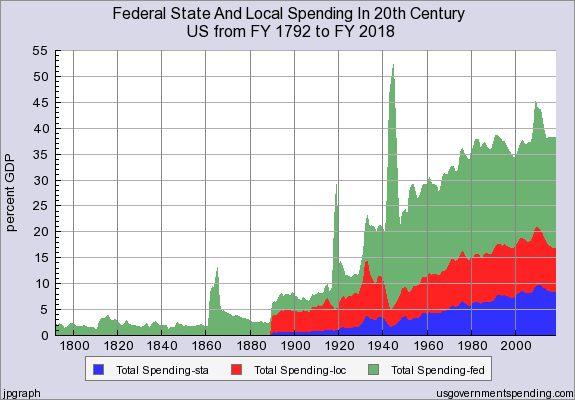 Please tell me how the Act for the Relief of Sick and Disabled Seamen proves the Founding Fathers would have loved ObamaCare. Meanwhile, their federal budgets regularly spent less than 3% of the nation’s GDP; recently, that figure has been well above 20% (not counting state and local spending, which have also skyrocketed). For most of America’s history, federal spending was below 5% of GDP. Heck, it was below 10% up through the New Deal, only spiking higher with America’s entry into World War II.

Similarly, up through the 1950s, about 80% of federal spending was on defense, 20% on everything else. Since then, the numbers have flipped, partly because defense spending has dropped rather dramatically as a percentage of GDP (so much for the claim that George W. Bush’s wars bankrupted the country), but mostly because federal entitlement spending has ballooned. Sargent refers to this bloated entitlement state as the “industrial state,” as if somehow it was necessitated by the workings of an industrial economy. But that’s a strange claim. The Industrial Revolution was reshaping the economy for more than a century before the New Deal, back when government was still tiny.

Our current system was established just in the last 35 to 45 years, which is to say that it is not much older than most of the people arguing about it (and a good deal younger than, say, Hillary Clinton). Yet we are supposed to treat it as if it were the fixed natural order of things, the alternative to which is literally inconceivable. Or as Sargent hyperventilates: “our society would likely not survive long” if we reduced the federal government back to its pre-welfare-state levels.

Which is easily disprovable. He is declaring that we would not long survive if we had the same system of government we enjoyed from roughly 1776 to 1913. During which period we not only “survived long” but grew and prospered in a way that was unprecedented and stunned the world.

But I suppose I can see why the left would have an interest in ignoring this history or pretending it was a mere temporary glitch, lasting just long enough for us to “solve” its problems by creating the modern welfare state. It allows them to stay within an ideological bubble in which they never have to consider anything more radical than “mere tweaks within an agreed upon level of government.” They want to have a frank and open debate among the center-left, the left, and the far-left. But they don’t want to have to listen to any right-wing nutjobs who suggest that the leftward lurch of the past few decades is actually the temporary departure from the norm, and that this is the system that is proving unsustainable. (Very unsustainable.)

What the left wants is not just to make America’s economic history disappear. It needs to make America’s political system disappear: to make truly small, truly limited government seem like a utopian fantasy that can safely be dismissed. Please bear in mind that this latest example came up in the context of a discussion about the justification for government force. So what they want to describe as an unrealistic fantasy is a society not dominated by coercion.

How sick is that? Consider how far out of their way they have to go, intellectually, to do this. They have to take one of the longest and most successful experiments with government and wish it away. They have to take the majority of this nation’s history and pretend it never happened.

They need to make the 19th century disappear in order to make America disappear—in order, I am afraid, to make the very concept of liberty disappear.