America’s health care system is a mess, and we can assign almost all the blame on government.

America’s health care system is a mess, and we can assign almost all the blame on government. Simply stated, we don’t have functioning and efficient markets because Medicaid, Medicare, tax-code distortions, and other forms of regulation and intervention have created a system that is crippled by a third-party payer crisis.

There’s no logical reason to expect consumers to be smart shoppers, after all, when they’re only responsible for directly paying just 11 cents for every $1 of health care they consume. And providers have little reason to be efficient when they know that consumers are largely insensitive to price.

The real fight is whether the government should mandate that health insurance plans include coverage for birth control (and certain abortifacients).

Writing for Bloomberg, Megan McArdle explains that Obamacare’s birth control mandate is silly because a modest and routine expense shouldn’t be covered by insurance at all.

I am not very patient with the political fights over the Affordable Care Act’s contraception mandate. …Generic birth-control pills are a cheap, regular expense used by many millions of people, exactly the sort of thing that insurance is not designed for. All this does is spread the cost around a bit while adding administrative overhead for your policy.

Moreover, the better policy is to allow birth control to be purchased without a prescription.

In other words, address the issue by reducing government regulation rather than imposing a mandate!

…make birth-control pills available over-the-counter rather than a prescription item. This is an excellent idea. It was an excellent idea before Obamacare passed, and it will remain a fine policy even if Obamacare somehow vanishes into dust. Physicians assess the danger of giving you birth control by asking simple questions you can ask yourself: Are you over 35, a smoker or troubled by a family history of early stroke?

Seems like a good idea, right? Particularly since it should appeal to Republicans that want less regulation and also appeal to Democrats that want easier access to birth control.

The Republicans are on board, as Byron York reports.

…the GOP has a new policy response… The idea is to make the birth control pill available over the counter, to all, 24/7, without a prescription. It’s becoming a trend among Republican candidates in Senate races around the country. In North Carolina, GOP candidate Thom Tillis recently embraced it. So has Ed Gillespie in Virginia. Mike McFadden in Minnesota. Gardner in Colorado. And one of the leading proponents of the move is a potential 2016 GOP presidential candidate, Louisiana Gov. Bobby Jindal. …Gardner first rolled out the proposal in a Denver Post op-ed in June. The birth control pill has safely been in use since it was first approved 44 years ago, Gardner argued. “When other drugs have that kind of track record, we approve them for purchase without a prescription,” he wrote. “Name-brand drugs like Advil, Pepcid, Claritin, Prilosec and many others were once sold by prescription only, but moved to over-the-counter sale once they’d been proven safe and unlikely to be abused.”

But some Democrats are hostile.

Indeed, a columnist for the Denver Post is very upset that some GOPers are supporting over-the-counter access to birth-control pills.

Following the lead of Colorado U.S. Senate candidate Cory Gardner, a handful of Republicans in midterm races across the country are now embracing over-the-counter sales of birth control pills without a prescription. Don’t be fooled. It’s a disingenuous move that could actually make the pill more expensive for women… But women already pay for those pills as part of the health care coverage they purchase through employers. Why would we want to pay for them twice? …What happens, however, if birth control pills are sold over the counter? Insurance companies will likely stop covering them. That means women will keep paying health insurance premiums, plus an additional out-of-pocket fee for pills. …And free doctor visits to discuss birth-control risks could also be replaced with fee-based pharmacy consults to determine whether women have risk factors like smoking, hypertension or migraines that prevent safe use of the pill, reports the American College of Obstetricians and Gynecologists. That’s hardly a “cheaper and easier” alternative — which is why Politifact rates Gardner’s claim as “mostly false.”

I strongly suspect that the author simply wanted to make a partisan attack on the Republican Senate candidate in Colorado. After all, more substantive and serious people on the left, including those at both Vox and Think Progress, favor over-the-counter access to birth control.

But let’s assume she really believes what she wrote. In which case she would get an F from any economics professors because health insurance companies obviously include predicted costs when pricing their policies. So if the mandate disappears and birth control is available without a prescription, then insurance companies will be able to lower the cost of the policies they sell.

In other words, women wouldn’t be paying twice. Indeed, they’ll pay less, though that will only be obvious to those who understand that employer-provided health plans are part of overall employee compensation.

There is another reason, other than partisanship, for some on the left to oppose Republican proposals to allow birth control to be sold over the counter. And you won’t be surprised to learn that self interest is playing a role.

You may think Ben made a big mistake, or that I misinterpreted. After all, isn’t that contrary to the organization’s ostensible mission of reducing unwanted pregnancies?

Well, Ben points out that Planned Parenthood may be more interested in maximizing handouts than it is in reducing pregnancies.

…interestingly enough, Planned Parenthood is pushing back on over-the-counter contraception. Why is this? Why would Planned Parenthood want to decrease the availability of contraception, and require women to see a doctor in order to get it? That seems awfully paternalistic of them. …birth control is a major lead generator for Planned Parenthood, to the degree that they can’t afford to lose their existing purpose as a source of prescribed contraception without it hurting their status as an institution. …Now you can understand why they wouldn’t want potential customers to be free to go to CVS or Walgreens or Rite Aid instead of heading to Planned Parenthood – providing those and other services is worth a lot of taxpayer money, $540 million in FY 2012 alone. And if you don’t provide those services, you can’t bill the taxpayers for them. …That’s why they want to keep the government’s ban on over-the-counter birth control intact.

Here’s a chart from Ben’s article that shows “what percentage of Planned Parenthood’s “services” are related to contraception.” As he notes, “it’s over a third of their activity.”

So I guess it makes sense – at least from an amoral perspective – that the organization wants to limit access to over-the-counter birth control. By the way, the GOP plan for easier access to birth control is not a move to uncharted territory.

Here’s a map from a pro-reform left wing group that shows that over-the-counter birth control pills are easily available to most of the world’s women. 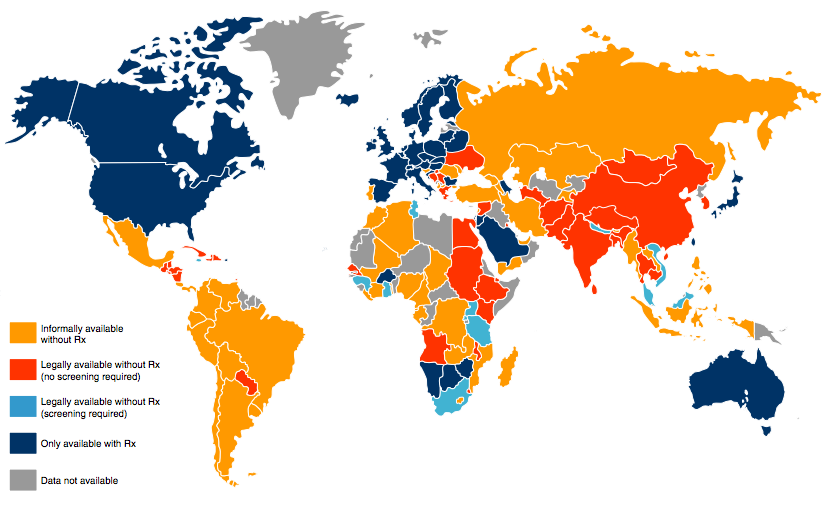 Let’s close by sharing one final – and very persuasive – piece of information from the experts at Reason.

Women already have over-the-counter access to Plan B, which involves larger doses of the hormones that are present in birth control pills.

…the Food and Drug Administration (FDA) has been considering making oral contraceptives available over-the-counter (OTC) for more than twenty years. “Plan B,” an emergency contraceptive, became available OTC last year. That one-step pill is simply a more potent dose of the same hormones that make up regular birth control pills. There’s no good medical justification for the differentiation. Yet in America, regular birth control pills remain stubbornly behind the pharmacy counter and behind the times.

In other words, the usual pro-regulation argument is that prescriptions are necessary because consumers can’t be trusted to make their own decisions with strong doses of medicine.

But the government already has made Plan B available over the counter while blocking similar access to birth control pills. Go figure.

P.S. Planned Parenthood is not the only interest group that has behaved in a disreputable and dishonorable fashion.

Dan Mitchell is an economist and senior fellow at The Cato Institute. Follow him on Twitter. This piece first appeared on his blog.