“We can put people to work in good jobs,” Biden pledged on Inauguration Day, hours before the new president revoked Keystone’s permit to bring Canadian tar sands oil down through Nebraska to refineries on the Gulf Coast. Nine months later, another Canadian pipeline successfully crossed the finish line to complete the construction of a new route from the same source similarly attacked by environmental activists.

Early this month, oil began to flow through the newly built Line 3 replacement pipeline from the Alberta tar sands, running a 337-mile stretch through Minnesota to end up at the Superior Terminal in northwest Wisconsin, just across the border from Duluth. The pipe’s operations, expected to carry 760,000 barrels at full capacity by mid-month, could be considered a triumph under an administration hostile to fossil fuel development.

The White House silence on Line 3’s construction, however, has left activists who landed an early victory with the shut down of the Keystone project frustrated at the stalled progress on the green agenda. The Line 3 Replacement project was launched by the Calgary-based energy firm Enbridge in 2017 after the U.S. Department of Justice (DOJ) and Environmental Protection Agency (EPA) ordered aging pipelines to be replaced. The existing line, mapped below by the company, had been in operation since the 1960s and had corroded after decades of use, becoming an environmental hazard by springing dozens of leaks. 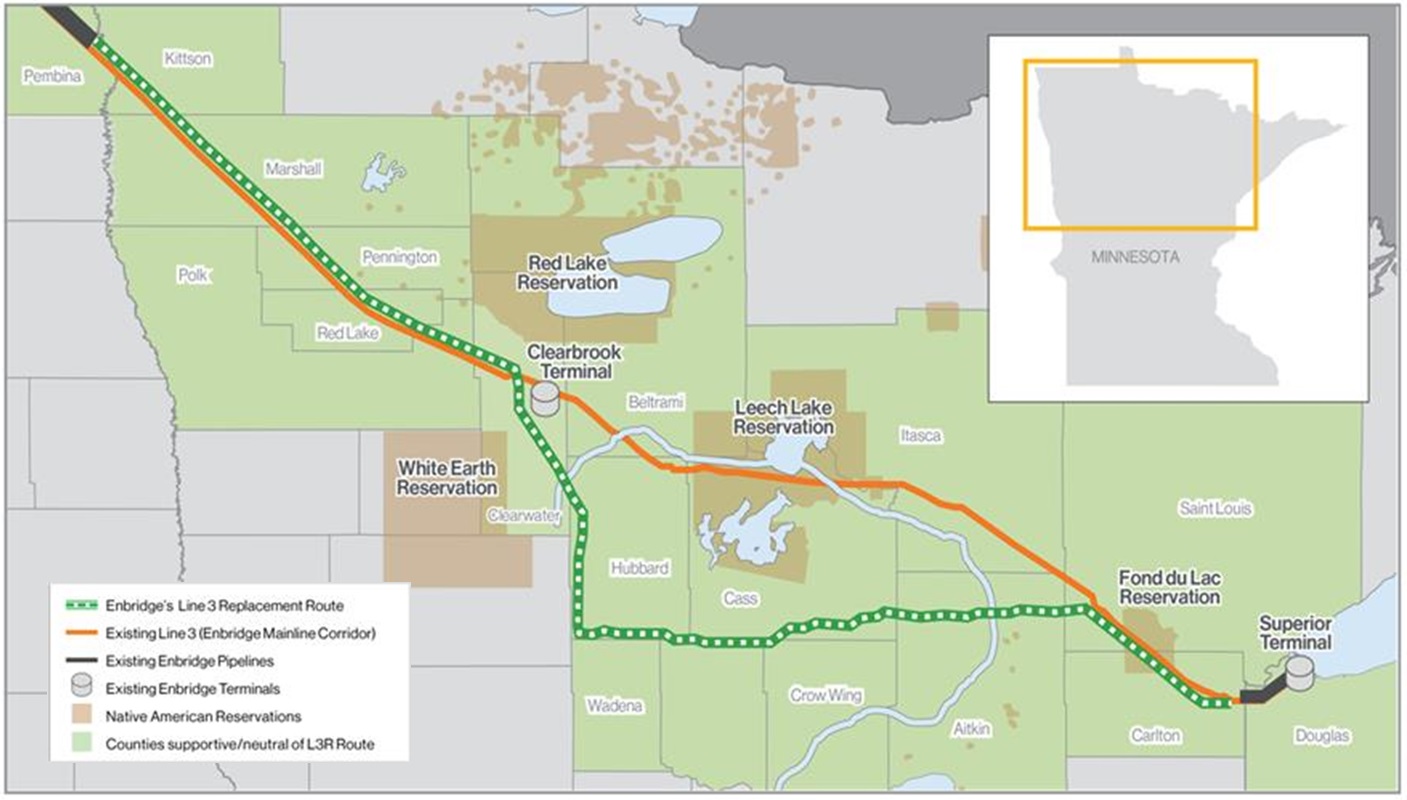 In 1991, a pipeline rupture spilled 1.7 million gallons of crude oil into the Prairie River near Grand Rapids, Minn., in the largest inland U.S. oil spill. It threatened to seep into the Mississippi. Because the spill happened in the winter, dense river ice enabled crews to keep the oil from reaching the north American artery.

The recent Hurricane Ida reinforced valuable lessons about the fragile nature of decaying infrastructure. After the category 4 storm barreled through the Louisiana gulf coast in August, 55 spill reports were recorded by the National Oceanic and Atmospheric Administration, highlighting the importance of replacement projects in the absence of viable alternatives at scale to satisfy allies of the Green New Deal.

Rather than abandon the pipeline, Enbridge initiated a $2.9 billion project to construct a new one while it cleans up the old. Those with property encompassing the outdated pipeline may decide under the landowner choice program whether to leave the pipe in the ground or compel the company to dig it up and scrap the material. According to the company website, the project generated at least 6,500 local jobs, pouring billions into local communities in the process, primarily in northern Minnesota.

Tyler Fjeld, a mechanic in Floodwood, which is home to fewer than 1,000 residents, said he’s seen the pipeline’s benefits firsthand. “They’ve spent a lot of money in the community,” Fjeld told The Federalist, citing business at his own shop, one of two auto stores in the area. The workers rent hotel rooms, service their vehicles in town, and pay frequent visits to the local bars and restaurants. “They really stimulate our economy in a small town like this.”

Others in Floodwood were unbothered by the pipeline in their own backyards, even after construction crews upstream pierced an aquifer in Clearwater County 150 miles northwest. The accident led to a $3.3 million fine by the Minnesota Department of Natural Resources for the company’s apparent deviation from the construction plan that led to 24 million gallons of groundwater released. Enbridge has until Friday to cork the well it created, and no charges have been filed as of this writing.

“Things are going to happen, that’s life,” said Karen Lace, a local barkeep in Floodwood. “I don’t have any objections to the pipeline.”

Although a new pipeline is far safer than the old, Fjeld said he had zero concerns about the pipeline’s safety.

“They have valves every so far, so if an oil line breaks, that line gets shut down almost simultaneously,” Fjeld said.

Protestors of Line 3, however, have pledged to push onward even as options dwindle to cancel the project over alleged environmental concerns and tribal sovereignty.

A series of protestor camps dot the more than 300-mile stretch of the now-operational Minnesota pipeline network. While most are preparing to disembark for the dark cold winter months of the upper Midwest, protestors at Camp Migizi are settling in for the long haul with self-sustaining shelters built to last. New yurts are under construction, a solar shack is underway to charge campers’ phones, and even an old bathtub is being refitted to serve as a fire-heated spa. While visitors to the camps, where they receive activist training with lessons on decolonization and social justice, are often vetted before arrival, residents at Migizi 35 miles west of Superior Terminal welcomed The Federalist with open arms without advance notice. Citing a tight “security culture,” none of the camp residents would share full names or allow pictures to be taken that showed faces. According to the Associated Press, more than 900 had been arrested or ticketed along the route since construction started in December of last year.

The camp possessed the vibe of 1960s-style music festival, with a small, hospitable population eager to meet new faces. Although ostensibly built to protect the state’s water from dangers presented by the pipeline, ideology undeniably drove their actions. Residents greeted each other as “comrades” and sported apparel supporting social justice. When asked about their preferred alternative oil transport to pipelines, residents rejected the idea that fossil fuels are needed altogether.

“Why are we still running oil?” said Jake Spotted Wolf, the matriarch of the camp who says she is registered with three affiliated tribes and is from the Fort Peck reservation. “Yes, I drive a vehicle that runs on fuel,” she added, pointing to a four-door SUV she was preparing to take to Vermont. “That’s because a system is not in place that says ‘Here’s an option for you to be able to run off the grid on vegetable oil, on diesel,’ sustainably without also going broke.”

Others gave similar answers, each united in their efforts to not only stop the pipeline, but end the use of fossil fuels while preserving what they described as “tribal sovereignty.”

“It is really not just an environmental issue here,” Minneapolis-area U.S. Rep. Ilhan Omar told ABC News last month. “It is an issue of, you know, solidarity with our indigenous neighbors. It is about standing up for Indian nations. It’s about fulfilling the treaty rights that we have as part of our laws in this country.”

Some tribes have allowed Enbridge to cut through their land, while others have objected. The new pipeline now circumvents the Leech Lake Reservation where the old one existed.

While the pipeline no longer infringes on reservation property at Leech Lake, the map below from the opposition group’s website claims treaty land encompassing nearly half the state based on agreements predating the Civil War. Although the Line 3 saga appears headed for the end upon project completion, which Spotted Wolf disputed as an Enbridge tactic to shut down opposition, the protestors’ complaints have met silence from the Democrats controlling Minnesota and the federal government. The same national coalition that provoked President Barack Obama to first halt construction of the Keystone Pipeline in 2015 never came to fruition against Line 3. Biden has remained silent on the Minnesota project after bringing the final axe to Keystone.

In September, a group of far-left House members known as “The Squad” pressed Biden to cancel the latest pipeline project. The cancellation never came from an administration — which features an interior secretary who rose to prominence over activism against the Dakota Access Pipeline — that even backed the pipeline in court litigation this summer.

“We can’t get a meeting with Tim Waltz,” Spotted Wolf said, pointing to his absence on the issue leading to a series of demonstrations her group held at the governor’s mansion and the state Capitol in Saint Paul, where several were arrested.

Enbridge did not respond to The Federalist’s inquiries for this story.

The U.S. was shocked with an abrupt energy interruption that spurred a national crisis in May when the nation’s largest pipeline experienced a five-day shutdown following a ransomware attack. The Colonial Pipeline, which transports 45 percent of the fuel consumed on the east coast, ceased operations as a result, provoking gas outages in 14 states and states of emergency in 17 plus the District of Columbia.

The meltdown led U.S. Energy Secretary Jennifer Granholm to profess to reporters “pipe is the way to go,” when outlining the challenges presented by gas transport via truck and rail, each more prone to disaster and each higher producers of greenhouse gases.

While it never brought back the Keystone Pipeline, killing tens of thousands of potential jobs amid economic decline, the administration went on to green light the Nord Stream 2 supplying Russian fuel into Germany even as it stifled energy projects at home.

While most of the tar sands oil gets exported overseas, American refineries benefit from processing what’s produced, and global supply affects prices at home. In August, the administration pled for overseas adversaries in OPEC to ramp up oil production in the face of surging gas prices partly caused by its energy-restrictive policies.

On Wednesday, CNBC reported Americans are now paying more for gas today than in seven years.

Power the Future, a 501(c)(4) energy nonprofit dedicated to American energy workers, paid for the travel to report this article. The nonprofit received no editorial input or pre-publication review.