While 55 percent of the electorate still believe colleges and universities are having a positive impact on our country, a majority of Republicans (58 percent) now believe the opposite, according to a new poll from the Pew Research Center. Their findings—pulled from polling conducted among 2,504 adults—suggest a considerable chasm in the perceptions of higher education between Republicans and Democrats. More than 70 percent of Democrats and Democrat-leaning independents reported a favorable view of America’s colleges and universities.

These findings on Republican opinion are remarkable in part because of the dramatic shift they reflect: just two years ago, most GOP voters (54 percent) believed that higher education was having a positive impact on our country. Only 37 percent rated the country’s educational institutions negatively. Last year, those numbers shifted to a 43 percent positive rating and 45 percent negative rating, respectively. 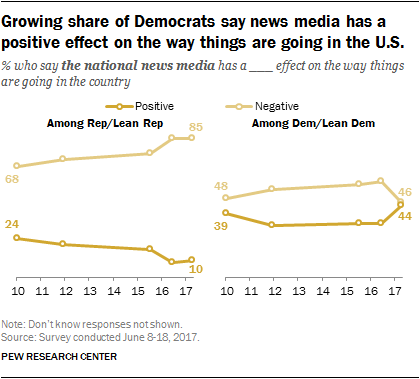 That quick collapse in Republican trust is causing a lot of people to look twice at this poll. Why have attitudes shifted so much?

Controversial Approaches To Speech Have Grown

The simple answer to this question could stem from recent events at universities like Middlebury College or the Naval Academy. Student (and staff) protestors have, in many of these instances, refused to listen to speakers they disagree with—sometimes turning violent in the process. In some of these examples, professors have lost their jobs (or been mistreated in some fashion) for touting unpopular ideas.

Conservative-leaning voters don’t just get angry at these events because they like Charles Murray or Jim Webb—they may not be familiar with their work or political opinions. Rather, they’re frustrated with a campus culture that quashes free speech, open discussion, and public discourse. They’re impatient with the intolerant tolerance that demands only specific ideas or thoughts be expressed openly, and all others be rejected.

What’s more, they sense a growing liberal bias that complements the progressive to the detriment or complete exclusion of the conservative. Take this Butler University class on “Trumpism and U.S. Democracy,” which one might assume to include readings from classic democratic thinkers like Alexis De Tocqueville, sociological and political studies by the likes of Christopher Lasch, or commentary from modern writers like J.D. Vance. Instead, Professor Ann Savage’s original course description promised to offer students an opportunity to “discuss, and possibly engage in, strategies for resistance” to Trump’s “sexism, white supremacy, xenophobia, nativism, and imperialism.” Many parents were in uproar over the political reactions such a course would promote. “We don’t pay you THOUSANDS of dollars to teach our children to act out when things don’t go their way,” one mom posted on the Butler Facebook page.

Vitriolic reactions to unpopular ideas or speech—as well as the inherent bias in courses like the above—aren’t the only things getting Republicans riled up about higher education, however. The debate over “safe spaces,” “trigger warnings,” and “political correctness” has risen to a head over the past couple years, as professors (and students) seek to cater to the wishes of their classroom—sometimes to the detriment of real learning, or even real belonging. William Deresiewicz documents some of the tangible results of such a culture over at The American Scholar, drawn from his experience teaching a course at a women’s college in California:

I had one student, from a Chinese-American family, who informed me that the first thing she learned when she got to college was to keep quiet about her Christian faith and her non-feminist views about marriage. I had another student, a self-described ‘strong feminist,’ who told me that she tends to keep quiet about everything, because she never knows when she might say something that you’re not supposed to. I had a third student, a junior, who wrote about a friend whom she had known since the beginning of college and who, she’d just discovered, went to church every Sunday. My student hadn’t even been aware that her friend was religious. When she asked her why she had concealed this essential fact about herself, her friend replied, ‘Because I don’t feel comfortable being out as a religious person here.’

I also heard that the director of the writing center, a specialist in disability studies, was informing people that they couldn’t use expressions like ‘that’s a crazy idea’ because they stigmatize the mentally ill. I heard a young woman tell me that she had been criticized by a fellow student for wearing moccasins—an act, she was informed, of cultural appropriation. I heard an adjunct instructor describe how a routine pedagogical conflict over something he had said in class had turned, when the student in question claimed to have felt ‘triggered,’ into, in his words, a bureaucratic ‘dumpster fire.’ He was careful now, he added, to avoid saying anything, or teaching anything, that might conceivably lead to trouble.

I listened to students—young women, again, who considered themselves strong feminists—talk about how they were afraid to speak freely among their peers, and how despite its notoriety as a platform for cyberbullying, they were grateful for YikYak, the social media app, because it allowed them to say anonymously what they couldn’t say in their own name. Above all, I heard my students tell me that while they generally identified with the sentiments and norms that travel under the name of political correctness, they thought that it had simply gone too far—way too far. Everybody felt oppressed, as they put it, by the ‘PC police’—everybody, that is, except for those whom everybody else regarded as members of the PC police.

“So this is how I’ve come to understand the situation,” Deresiewicz writes in conclusion. “Selective private colleges have become religious schools. The religion in question is not Methodism or Catholicism but an extreme version of the belief system of the liberal elite: the liberal professional, managerial, and creative classes, which provide a large majority of students enrolled at such places and an even larger majority of faculty and administrators who work at them. To attend those institutions is to be socialized, and not infrequently, indoctrinated into that religion.”

This has deeply influenced Republican perception of higher education—and will continue to do so, as long as these trends continue unchecked. Many conservatives want their youth to be challenged, stretched, and nurtured intellectually. They don’t want them to be attacked for their principles, or submerged in a culture that only allows one mode of thought or politics.

It’s also true that current Republican attitudes toward higher education could be influenced by the widespread populism (and, correspondingly, anti-elitism) of the moment. Donald Trump’s election suggested a dissatisfaction with the actions and processes of the insiders and expert class, the coastal elites who—at least per widespread public perception—“run the show.” Trump campaigned on promises to “drain the swamp,” assuring voters that his business acumen would offer them something different, something more approachable and tied to their wellbeing than the actions and policies of the intellectual elites.

Of course, not all Republicans believed Trump’s promises. Many were (and are) dissatisfied with the results of the 2016 presidential election. But even among those who dislike Trump, I’ve seen a widespread defensiveness of the small-town voter and blue-collar worker amongst GOP voters after November 2016. Many of these voters dislike the snobbish disdain they often sense from progressive (and even conservative) elites towards the common folk.

For some, this resentment has built into an anti-intellectualism that can reveal itself in a corresponding wariness of higher education. Many of these people have experienced a dependability, loyalty, and experiential common sense amongst the uneducated—the self-taught, the entrepreneurial, the hard-working blue-collar class—that they haven’t experienced amongst the nation’s elites.

All of this affects widespread perceptions of higher education. But it also must be noted that, on a more practical and less ideological level, a lot of Republicans can find cause to criticize America’s colleges and universities. Many of them have saddled young people with staggering student loans, without offering them a secure future or source of income. There are college-educated individuals working at Starbucks or the local grocery store, hardly able to make rent payments, let alone pay off their college debt.

What’s more, many students may be able to engage in some sort of thoughtful discourse about literature or the arts, but are unable to pay their bills on time or make meals from scratch. College taught them to be cerebral, but it didn’t teach them “adulting”: the basic skills they need for survival. Millennials have increasingly used this word (to the detriment of their image in public perception) to describe the most basic of real-world activities—such as working a 9 to 5 job, doing laundry, and buying vegetables.

In this sense, the cost-benefit analysis of college falls very short in the opinion of many conservatives, some of whom likely have recently hired or worked with recent college grads. Colleges and universities have fallen far short of providing their students with two basic things: first, the skills they need to succeed in the world at large, and second, the financial independence they need to survive in a troubled economy.

It Doesn’t Have To Be This Way

There are a lot of reasons to feel displeasure with the state of American academia. But I don’t think that necessitates deserting the academic institutions that can bring essential goods to Americans, young and old. We needn’t desert classical liberal arts degrees for practical vocational education (although a shift towards more skills-oriented offerings would probably be good for a lot of Americans).

We need to understand the implications of an academic system that’s broken in many ways. And we should try to fix its problems: by determining ways to lessen the burden of student loans (without necessarily offering free college), and by equipping students to navigate the difficulties of adulthood—not just by helping them cultivate practical life skills, but also by helping them confront and engage with difficult (even controversial) ideas and concepts. Students must learn to confront the “other” in a way that’s thoughtful, engaging, and empathetic.

Without that ability, college students will find higher education hampers their future success more than it helps them. And Republicans will likely continue to rate their country’s educational system poorly in years to come.