The 50-45 vote along party lines came buried at the end of a turbulent day on Capitol Hill in which Democrats failed to advance their colossal $3.5 trillion spending package littered with items for special interests.

“Our public lands are one of America’s finest ideas, and I am ready to get to work alongside a remarkable team to ensure future generations benefit from them like we have,” Stone-Manning said in a statement following her confirmation.

Only several decades ago, her admiration for public lands meant sealing them off by way of ecoterrorism while she vilified children as “environmental hazards.” Now she’ll have the full leverage of the federal government to do so, while Amazon promotes books on “How to Blow Up a Pipeline.”

Stone-Manning’s nomination to lead the nation’s pre-eminent land agency became the most controversial of Biden’s appointments when details emerged of the ideologue’s past participation in a 1989 tree spiking case.

A popular form of domestic terrorism among far-left environmental activists in the late 20th century, “tree spiking” features metal rods jammed into trees that turn into deadly projectiles that can kill people when processed for logging. In 1987, two years before Stone-Manning’s group spiked trees in northern Idaho, a 23-year-old millworker lost teeth and part of his cheek and jaw when an 11-inch spike driven into a tree shattered a large ban saw he operated. While targeting workers in the lumber industry, the spikes can also injure or kill firefighters, and have in the past.

In 1993, Stone-Manning accepted legal immunity in exchange for testimony that she aided in a 1989 tree-spiking incident in northeast Idaho’s Clearwater National Forest. At the time, the new head of the agency that oversees 12 percent of the nation’s land testified she retyped and sent an anonymous letter to the U.S. Forest Service for her former roommate John T. Blount, warning 500 pounds of “spikes measuring 8 to 10 inches in length” were driven into part of the Clearwater Forest targeted for harvest.

“P.S.,” finished the letter, which was obtained by The Federalist, “You bastards go in there anyway and a lot of people could get hurt.”

While Democrats framed Stone-Manning’s immunity deal and subsequent cooperation in the case as heroic to shepherd along her nomination, new details emerged from the primary investigator on the case to reveal Stone-Manning as anything but cooperative.

“Contrary to many stories in the news, Ms. Stone-Manning was not an innocent bystander, nor was she a victim in this case. And she most certainly was not a hero,” wrote Special Agent Michael Merkley in a July letter to the Senate Energy and Natural Resources Committee.

“She was vulgar, antagonistic and extremely anti-government,” Merkley added, calling her “extremely difficult to work with” and “the nastiest of suspects.”

The nominee’s trial in committee was made all the more complicated by her claim to have never been the subject of a government investigation. When asked in a standard questionnaire whether she had “ever been investigated, arrested, charged by any federal, state, or local law enforcement authority for the violation of any federal, state, or local law, regulation, or ordinance, other than a minor traffic offense,” Stone-Manning wrote no.

Yet she had even complained about the tree spiking investigation to the local press in 1990.

“It was degrading. It changed my awareness of the power of the government,” she told the Spokesman-Review. “Yes, this is happening to me and not someone in Panama. And yes, the government does do bad things sometimes.”

Stone-Manning also caught controversy after her 1992 graduate thesis surfaced. In it, she declares children are environmental hazards and advocated for a Chinese-style child cap. 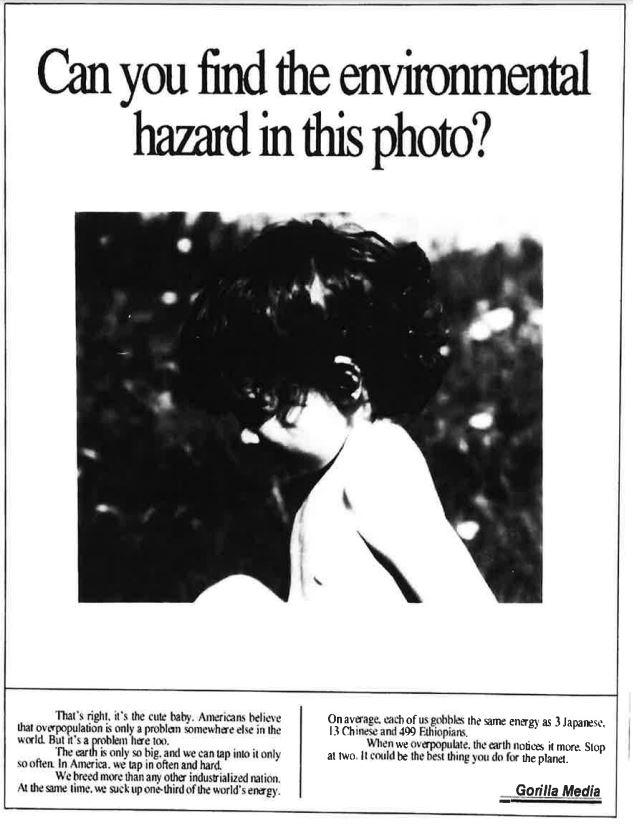 “Can you spot the environmental hazard in this photo?” read an ad headline in the paper. “That’s right, it’s the cute baby. Americans believe that overpopulation is only a problem somewhere else in the world. But it’s a problem here too.”

The ad by Stone-Manning continued: “The earth is only so big, and we can tap into it only so often. In America, we tap in often and hard. When we overpopulate, the earth notices it more. Stop at two. It could be the best thing you do for the planet”

Another ad she created raised issue with grazing on public lands.

“It is overgrazed. Most likely, the grasses won’t grow back, because the topsoil took flight,” Stone-Manning wrote. “Worse still, the government encourages this destruction. It charges ranchers under $2 a month to graze each cow and its calf on public land — your land.”

Stone-Manning will now oversee 155 million acres of grazing land for livestock nationwide, about the size of Arizona and New Mexico.

The Senate committee deliberating on her nomination approved her nomination in the evenly divided chamber after Democrat Chairman Joe Manchin of West Virginia gave the nominee his blessing.

In a speech on the Senate floor Thursday, Wyoming Republican Sen. Cynthia Lummis railed against Stone-Manning as “one of the most egregious nominations to ever receive a vote on the floor of the United States Senate.”

Even former President Barack Obama’s BLM Director Bob Abbey, who ran the agency from 2009 to 2012, called for Stone-Manning’s nomination to be withdrawn.