The news that Paul Ryan has decided to place his name in the running for Speaker of the House is a good thing for the Republican Party. Ryan has the potential to unify the warring factions of the party; he has the trust of the vast majority of members; and he represents a new generation of leadership for the GOP, a party that has too often let hierarchical concerns win out over ability.

Congressional leadership is important. The level of trust it accrues, the competence it has in fulfilling the priorities of members, and the leadership it offers for a midterm party that has difficulty winning the presidency is all significant. All these things matter. But we shouldn’t exaggerate its importance in the bigger scheme of things. “[Paul] Ryan’s initial, categorical opposition to becoming speaker melted under the heat of dozens of frantic phone calls from Republican luminaries — including senators up for reelection, leaders of GOP-allied outside groups, and representatives from presidential campaigns — warning that further dysfunction in the House would do the party widespread damage next November, and perhaps for years to come.”

Who actually thinks this? “Years to come”? Has there been an election in American history, certainly within the modern era, when a party lost elections because of insufficiently strong congressional leadership? The American people barely know the name of the Speaker of the house, let alone the other leaders. And that’s just fine.

Time to Disrupt the House

The Speaker of the House is a job most Americans will not do. This is one of the reasons Paul Ryan could be so confident in driving a hard bargain. So if he is to do it, it will be on his own terms. After meeting with them yesterday, Ryan obtained the backing of a majority (but not the required 80 percent to change endorsements) of the House Freedom Caucus. At the time, he reportedly declared his openness to various ideas regarding structural reforms without committing himself to pushing anything specific through the conference. We will likely get the chance to find out how much he is interested in changing the way Congress works soon enough.

What would something like this look like in practice? Yesterday, John Podhoretz asked me about this debate regarding shaking up the Congress, suggesting that House Freedom Caucus members are more interested in getting on talk radio to complain about leadership than doing actual work. A fair point! But of course, the reason many of these Freedom Caucus members have a microphone on talk radio is that they have regular opportunities to complain about leadership selling conservatives out behind closed doors.

Here’s the good news: moving to an open process eliminates that ability. It will expose conservative ideas either as unworkable or as workable, and allow the political process – from Congress to primary voters – to adjust accordingly.

This is Not About Outcomes

This is not an argument about outcomes. A more open process will sometimes result in better policy, and sometimes not. But in the prior leadership scenario, conservative ideas were regularly shot down by leaders of dubious conviction, candor, and competence. It’s better to let the process work as it should, to end the governing by crisis. Congressional leadership has for years attempted to control the marketplace of ideas on promises that they knew best how to manage it. Recent history suggests they don’t. Letting those conservative ideas get defeated or adopted on the floor, and letting the chips fall where they may, ends the ability of conservatives to rail against the backroom deals of leadership.

Outcomes are important, but they’re not the only thing that is important. Even members of the Freedom Caucus such as Justin Amash acknowledge that the end result of moving away from governing by crisis (and insisting there are no alternatives to predetermined deals) will sometimes be more liberal policy outcomes. http://vlt.tc/25e7 “Under regular order, bipartisanship and compromise flourish. With control over the legislative agenda devolved to committees, subcommittees, and individual representatives, more liberal outcomes are possible, but so, too, are more conservative or libertarian outcomes. No one gets everything he or she wants, but under a fair, deliberative process, we all can respect the results. Most important, the outcomes more genuinely reflect the will of the people.”

This is not, of course, how Congress currently works. What currently happens is that leadership and its fellow actors – including committee chairs and industry lobbyists – decide where a bill ought to be on the ideological scale. More hardline conservative members think it needs to be much better, but leadership insists no, they know where the votes are, and the votes aren’t there for something better. Conservatives say: we disagree, let us bring an amendment forward on the floor to make it better, vote on this, and if it fails, then we’ll talk about your measure. Leadership then blocks that amendment – not because it can’t pass, but because they know it will. Leadership insists: it’s our deal, or nothing. Conservatives say: we’re fine with nothing. Leadership says: we don’t need you anyway, we’ve got the votes. So they schedule a vote, discover they don’t have the votes after all, and have to pull the bill.

The end result of this little drama is that hardline conservatives come to view leadership as dishonest, squishy, and incompetent (they can’t even count votes), while leadership views these right-wingers as extremists, obstructionists, and generally bad team players. That’s why the problem at the core of the GOP conference right now is not ideological or strategic – it’s trust. Wingers think leadership rigs the game to make policy outcomes more liberal for the sake of moderate incumbents or K Street, while leadership thinks wingers are unreasonable or operating in bad faith. And right now, when leaders say, “Take our word for it, this is the most conservative bill that can pass”, it just sounds like a punchline.

But there’s another way. What if, instead, leadership told the committee chairman, have your committee write the bill and we’ll bring it to the floor under an open rule. They craft a marginally conservative bill. On the floor, conservatives will offer amendments to the bill, and a lot of them will pass, making the bill more conservative. And Democrats and moderate Republicans will also team up on amendments that pull the bill in the opposite direction. You will end up with something that is a mixed bag of measures, with some that tug it one way, others that tug it the other. The only person angry about that process is a committee chair.

That’s a scenario where the bill will likely ultimately pass. But let’s consider a different one – say a committee reports a marginally conservative bill and the chairman says: this is as good as we’re going to get. Conservatives demand an open amendment process, and it turns out the chair was right. Moderates and Democrats who may have felt obliged to vote for a marginally conservative measure amend it down to a marginally liberal one, and the bill either dies or passes with a bipartisan coalition. Again, who is angered by this process? The votes were transparent, and if moderates were out of line, primary voters are better than leadership at imposing discipline anyway. Conservatives would be happier with such a process, but so would others.

Give Conservatives the Damn Ball

NFL fans will recognize this for what it is: It’s a classic dysfunctional Quarterback-Wide Receiver relationship writ large. This is Keyshawn Johnson demanding that you give him the damn ball. This is Greg Jennings, broken leg and all, putting the team on his back. And when the more enthusiastic House Freedom Caucus members run to talk radio, it’s the political equivalent of Terrell Owens working out in his driveway. 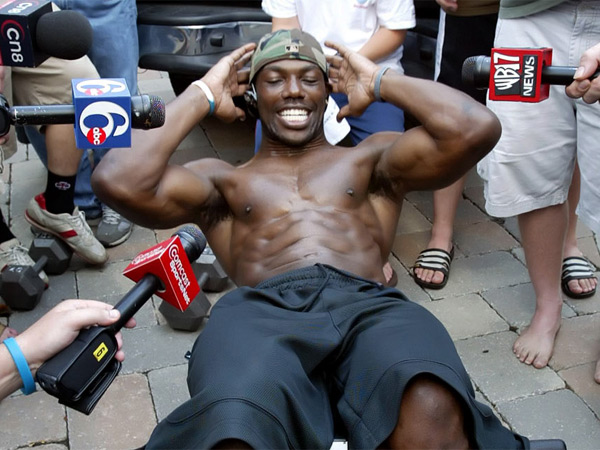 Here’s the thing about those wideouts: If you just give him the damn ball, then he can’t blame everyone else for losing.