The more our elections rely on the Postal Service, the more interference we can expect.

Starbucks recently asked the National Labor Relations Board to suspend all pending and ongoing votes to unionize at its U.S. stores due to concerns stemming from mail-in ballots. The franchise’s objections once again raise questions about the credibility of election systems that rely on mail-in ballots.

As with coffee companies, how much more with the American electoral process? With hundreds of millions of dollars of campaign material and increasing numbers of ballots in the mail, postal efficiency and honesty are becoming increasingly vital to free and fair elections.

Ostensibly to address some of these concerns, the U.S. Postal Service (USPS) announced on July 28 that it was creating the Election and Government Mail Services division. Adrienne E. Marshall, a USPS veteran, was named as the division’s first director, with Marc Elias, the Democrat’s foremost lawfare professional and longtime proponent of elections by mail, tweeting out his approval. 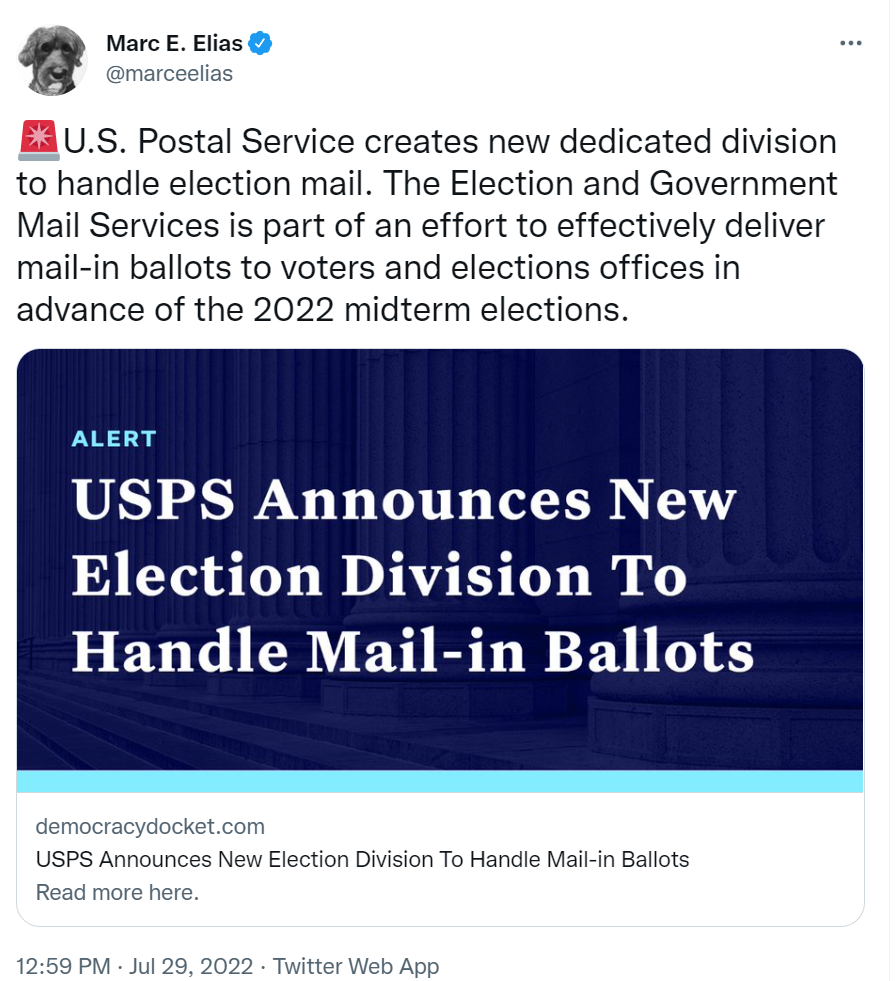 The rationale for this new division is that the growing use of mail-in ballots requires extra attention to ensure the greater volume of mailed ballots can be handled by an increasingly overburdened USPS.

The USPS reported it delivered more than 135 million ballots in 2020, with 40 million delivered so far this year during the primaries.

Elections conducted by mail have been a longtime goal of Elias and others since long before public health fears over in-person voting during the Covid-19 pandemic. It is instructive to note that most European nations found mail-in ballots to be susceptible to fraud and limited their use.

Among other problems, mail-in ballots can be cast by someone other than the voter, voter ID measures are harder to ensure absent in-person voting with a government-issued ID, and the secret ballot is more easily compromised by professional ballot traffickers who “help” the voter fill in their ballot. Thus, mail-in ballots will be an increasingly important part of the Democratic election playbook.

In related news, President Joe Biden nominated three people to fill vacancies on the nine-member USPS Board of Governors. The board determines the postmaster general, who remains, for now, Louis DeBoy.

Biden’s nominees include the former chief counsel for the American Postal Workers Union and the head of the National Vote at Home Institute, a non-profit that pushes for nationwide mail-in voting. Some 80 Democratic members of the U.S. House of Representatives sent a letter to Biden urging action on the board of governor nominees to speed DeJoy’s ouster.

Should the voting public be concerned about the USPS paying closer attention to mail-in ballots? It depends on the trust you place in federal institutions and their employees.

The U.S. Postal Inspection Service is the oldest federal law enforcement branch. Regarding election-related mail, both campaign material and ballots, the Postal Inspection Service says they monitor “political and election mail as it moves through the postal network to prevent, identify and resolve any issues that might interfere with its secure and timely delivery.” All of which sounds great in theory, but what happens if the mail doesn’t get through? Or if it doesn’t get through selectively? Investigating after the fact won’t change election results.

By its own metrics, the USPS claimed it delivered 99.89 percent of mail-in ballots within seven days during the 2020 election. But what if the leadership of the USPS’s heavily unionized workforce decided to put their thumbs on the scale? The National Association of Letter Carriers is an affiliate of the AFL-CIO and endorsed Biden in 2020. It represents 277,000 workers.

The American Postal Workers Union also endorsed Biden. It represents another 330,000 workers and is also under the AFL-CIO umbrella. If there was a concerted effort to hinder election mail, the Postal Inspection Service likely wouldn’t notice it in time to stop it and prevent selective delivery of the mail from tipping an election.

In the case of mail-in ballots, USPS union interference might take the form of an effort to target delays in Republican-heavy areas of both mail-in ballot applications and the ballots themselves. But there are other ways to tip the scales through the mailbox: interfere with mailed campaign materials.

A lot of campaign work involves the organization of presorted mail and delivering it to the appropriate post office loading dock. These mailings feature prominent “election mail” tags that are supposed to guarantee that campaign bulk rate mail was treated as first class. It isn’t impossible that unionized postal workers might seek opportunities to “misplace” the mailings of conservative campaigns.

Two years ago, the USPS conducted an audit of election mail and found that some 68,000 pieces of election materials for the Baltimore mayor primary sat undelivered for five days before the June 2 election. This resulted in much of the campaign mail not being delivered until after most Marylanders had already cast their ballots by mail.

Incumbent Democratic Baltimore Mayor Bernard C. “Jack” Young placed fifth in the primary. Young was seen as moderate and pro-business. Young raised the most money, but he was beaten by a progressive candidate who enjoyed substantial union support, Brandon Scott. Of the late mail, Young speculated, “That might the reason why I didn’t get a lot of votes.”

In what might have been a case of projection, two months later, Maryland Democrats accused the USPS under President Trump of deliberately slowing mail delivery to sabotage the November election. Notably, the president of Baltimore’s American Postal Workers Union promised, “Your mail will be delivered … you will get your vote counted.”

In May 2022, there was abundant evidence suggesting there was a concerted effort by postal workers to swing runoff elections in Texas. The Texas State House of Representatives District 73 is the 32nd most Republican district of the state’s 150. According to an analysis by “The Texan,” the district has a 71 percent Republican partisan lean — meaning that the real contest is in the Republican primary, as there is little chance of a competitive general election.

After a three-way primary, the runoff came down to Barron Casteel and Carrie Isaac. The Casteel campaign received financial support from the largest government workers union in the nation, the American Federation of State, County and Municipal Employees (AFSCME), fire and police unions, and the Association of Texas Professional Educators. Given the hard Republican tilt in this district, Casteel would be the best Republican the unions could hope for.

And, as happened in Baltimore in the 2020 primary, delayed campaign mail played a role in this election — though Isaac ended up prevailing by 271 votes out of the 22,207 cast and won by a margin of 1.2 percent.

Campaign mail today is scanned and tracked. This allowed Isaac’s campaign consultant, Jordan Berry, to know with certainty that six mailers totaling 11,426 pieces targeted at high-propensity Republican households in Hays County were delivered after the election. The six mailers were each dropped on separate days and cost the campaign around $10,000.

As might be expected, the late mail had an effect on the election. Isaac, whose husband Jason represented Hays County for eight years, from 2011 to 2019, was expected to win Hays County as it was her home turf. Instead, she narrowly lost to Casteel by 308 votes. In Comal County, where Casteel served as mayor of New Braunfels, Isaac won by 579 votes.

Of the late mail, Berry noted, “Of course, it had a negative effect. The campaign went dark to thousands of voters in the crucial homestretch. And over 15 years of political campaigns, this has never happened to one of our clients. That said, I’ve never seen so much union activity in a Republican primary. This was one of a handful of Republican runoff races where there was a significant difference between the candidates on key issues such as parent empowerment, government unions, and small business policies.”

Labor unions came within a few hundred votes of altering the composition of the Republican caucus in the Texas State House of Representatives, not by campaigning or by deploying manpower but by interfering with the mail. One wonders where else in America this might have happened in the past few years. 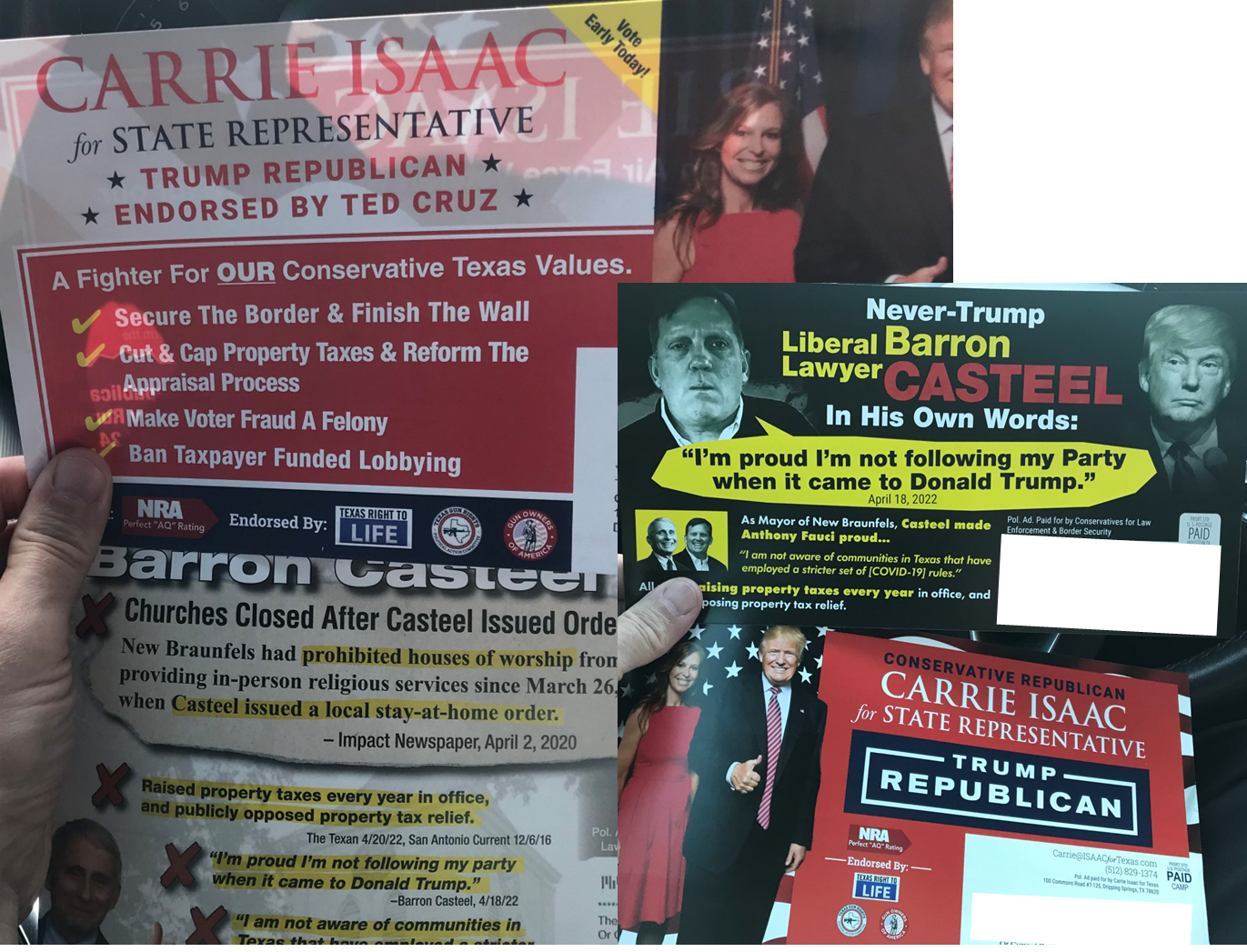